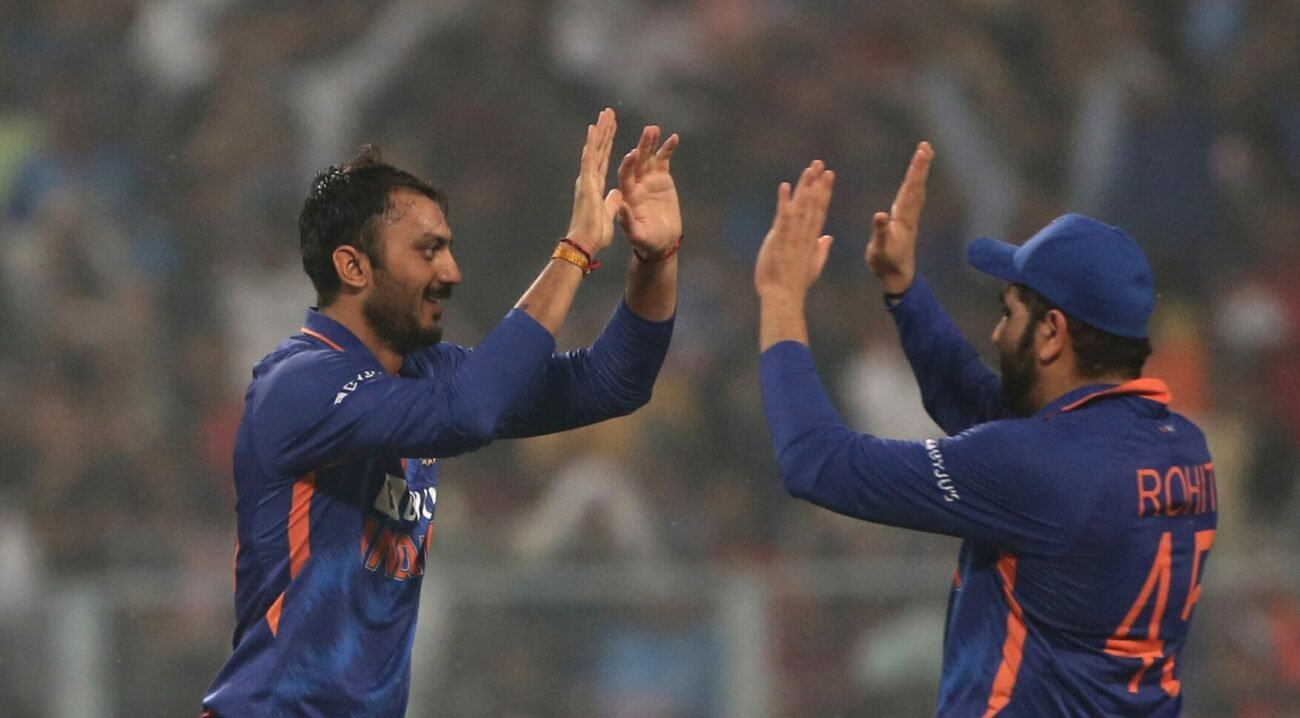 India’s Axar Patel and Rohit Sharma celebrate the dismissal during the Third T20 International match between India and New Zealand, at Eden Gardens in Kolkata on Nov. 21. (ANI Photo)

KOLKATA, India — Axar Patel took three wickets as India completed a 3-0 sweep against New Zealand with a 73-run win in their third Twenty20 match on Nov. 21.

Martin Guptill scored 51 off 36 balls as T20 World Cup finalist New Zealand crashed in its chase to 111 all out in 17.2 overs against India in Kolkata.

Rohit Sharma’s 56 off 31 balls had led India to 184-7 after winning the toss and choosing to bat.

India won the first T20 in Jaipur by five wickets and the second T20 in Ranchi by seven wickets.

It was the sixth time India has won a T20 series with a 3-0 margin, joint top with Pakistan, and New Zealand’s fourth biggest defeat by runs in T20 cricket.

“Credit to India for the way they played throughout the series,” New Zealand stand-in skipper Mitchell Santner said.

Chasing 185, New Zealand had a torrid start to its innings. Patel took three wickets in 10 deliveries as the Black Caps were reduced to 30-3.

Daryl Mitchell (5), Mark Chapman and Glenn Phillips were Patel’s victims. The latter duo didn’t even open their accounts, facing six deliveries in all.

Patel finished with 3-9 in three overs.

“It feels good to start well. Everyone played really well right through the series. It was a good series win,” said India’s new coach Rahul Dravid. “We have to keep our feet on the ground and be realistic about this win. t was not easy for New Zealand to play a World Cup final and then turn up three days later to play three games in six days. We have to learn from this series and move forward. It is a long journey ahead in the next 10 months.”

Guptill, who struck four fours and four sixes, fell to Yuzvendra Chahal (1-26) and was caught in the deep after his half-century.

India’s superiority saw Tim Seifert (17) and Lockie Ferguson (14) as the only other batters to reach double figures. Harshal Patel finished with 2-26.

Santner dismissed Kishan, Suryakumar Yadav and Rishabh Pant in two overs. Then, Sharma fell after his half-century as India stumbled to 103-4.

Shreyas Iyer (25) and Venkatesh Iyer (20) stabilized the innings. Deepak Chahar’s 21 not out off eight balls took the score past 180.

A two-test series begins Nov. 25, with the first match to be played in Kanpur.