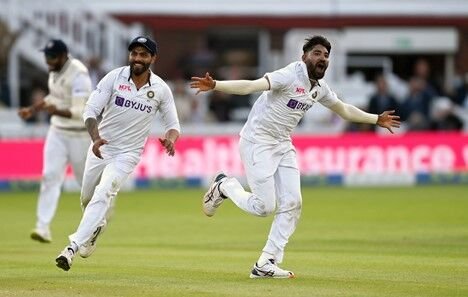 India’s Mohammed Siraj celebrates the wicket of England’s Sam Curran during the 5th day of the Second Test match between India and England at Lord’s, in London on Aug. 16. (ANI photo)

LONDON — India skittled out England for 120 in less than two sessions on a highly charged Day 5 at Lord’s to win the second test by 151 runs Aug. 16 and take a 1-0 lead in the five-match series.

With about a half-hour left of a fractious day featuring regular verbal clashes between players, Mohammed Siraj bowled Jimmy Anderson and celebrated by removing the off stump he had just clattered and wheeling around the outfield in delight at the home of cricket.

India declared on 298-8 just after lunch to set England 272 to win in 60 overs. It was a victory target the hosts never intended to chase, but one they couldn’t defend either.

Both openers, Rory Burns and Dom Sibley, were out for 0 — the first time that has happened to England at home in 143 years of test cricket — while Jonny Bairstow and captain Joe Root, the prized wicket, fell in the overs either side of tea.

Sam Curran then suffered the embarrassment of becoming the first player to succumb to a king pair — two golden ducks — in the same test match at Lord’s.

A pumped-up India team wrapped up the win soon after Jos Buttler’s 96-ball vigil, for 25, feathered a catch behind off Siraj, who removed Anderson in his next over to claim figures of 4-32 off 10.5 overs. There were only 8.2 overs remaining.

It was India’s third test win at Lord’s.

The first test was drawn at Trent Bridge. The third match of the series starts Aug. 25.