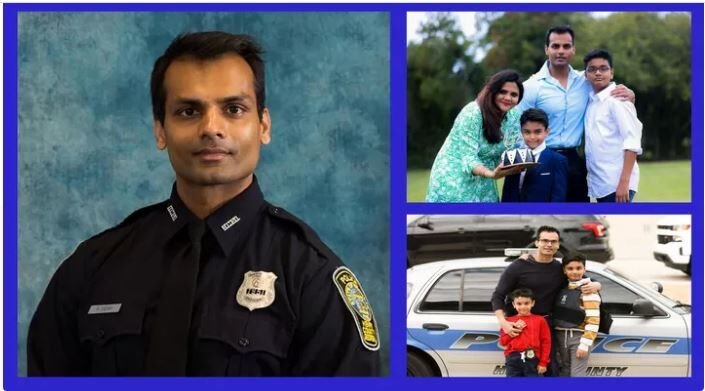 An Indian American police officer who was shot while responding to a domestic dispute in McDonough, Georgia, succumbed to his injuries Nov. 8, after four days on life support at the Grady Memorial Hospital.

A funeral service for Paramhans Desai, 38 at the time of his death, was scheduled for Nov. 14 at the Henry County Performing Arts Center in McDonough.

A prayer service was also held Nov. 12 for the slain officer at the Henry County police headquarters. In another tribute, Zechariah Cartledge, 13, of Running 4 Heroes Inc., honored Desai with a 1-mile run carrying the Blue Line Flag, which represents support for law enforcement.

Desai is survived by his wife, Ankita, and their two young boys, Om, 11, and Namah, 8. He had worked in law enforcement for more than 17 years, and continued to serve his community after his death by donating his organs. Desai joined the department in 2020 and had also worked for the Georgia Department of Corrections and DeKalb County Police.

The Henry County Police Department issued a blue alert for Jordan Jackson, 22, who was believed to have shot Desai.

Jackson fled the area after the shooting, and committed suicide via a single gunshot after barricading himself inside a home in Clayton County, Georgia, as police attempted to take him into custody. Henry County Sheriff Reginald Scandrett said in a press statement that the manhunt for Jackson should serve as a warning to anyone contemplating such crimes.

“It doesn’t matter how many days it takes, how much sleep we lose, we will hunt you down and find you,” Scandrett said. “To the family of Officer Desai, this will not take away the pain but, hopefully they can get some rest and start the healing process.”

A $70,000 reward was offered for clues leading to the capture of Jackson.

“He loved his job. He loved coming to work every day. He loves serving his community. He was a beacon of light,” Amerman said, as reported by The Associated Press.

Desai’s sister Divya Desai has organized a GoFundMe campaign to help Desai’s young family with their daily needs, and establish funds for the boys’ education. The fundraiser, which can be viewed here — https://www.gofundme.com/f/officer-paramhans-desai-memorial-fund — quickly raised more than $310,000, surpassing its goal of $250,000.

“Never in my wildest dreams did I imagine that I would one day start a Go-Fund-Me page for my brother, slain police officer Paramhans Desai.” wrote Divya Desai. “As shattered as I am, as his wife and two boys are, we are in the process of picking up the pieces and the only thing that keeps us going as a family is the spirit with which my brother lived his life.”

Divya wrote that her brother had dreamed of becoming a police officer when he was only eight years old. “Our parents hoped that this was a passing phase, one of those dreams that tend to change with age and time. But that was not the case. Param dug deep, worked hard, struggled and became exactly what he intended to be.”

“There is always a cost to pay when you pursue a dream, a passion. And my brother was willing to pay that price to become a police officer. He often said he wanted to die as a cop and that’s how his journey ended,” wrote Divya, adding: “He served his community with every fiber of his being.”

Desai and his family moved from India to the U.S. 30 years ago.