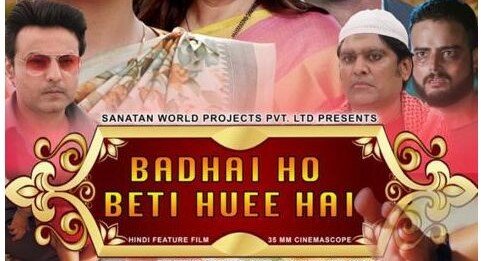 Indian American producer Rick Sharma has put his weight behind a new film celebrating the arrival of a girl child.

Titled, “Badhai Ho Beti Huee Hai,” the film, starring Yamini Swami and popular television actor Aryamann Seth, focuses on breaking the stereotypes associated with a girl child and enabling a woman to be an anchor of the family.

Sharma has executive produced the film which is inspired by the Government of India’s ambitious scheme, ‘Beti Bachao, Beti Padhao Abhiyaan’ (Educate the girl child, save the girl child).

The film is presented by ace filmmaker Pradeep Sarkar, who is known for his iconic women-centric films like “Mardaani,” “Laaga Chunari Mein Daag,” “Parineeta” and “Helicopter Eela.”

Written and directed by Swami and produced under the Sanatan World Projects Pvt Ltd Productions banner, the film was budgeted around Rs. eight-nine crores and was completed by March 2020, but its release got delayed due to the pandemic.

For its release, Sharma told India-West, they are in discussions with several streaming platforms and a decision will be made soon.

The film was initially shot in Ranchi, Jharkhand, and many scenes were further shot in Mumbai and Delhi, covering the journey of the girl who makes a big leap.

The story follows a girl who gets equal opportunities and makes it big in the male-dominated society. It showcases how she educates herself and attains the skills which set her up for success and in the process, is able to shape opinions in her family.

“Daughters are not less than sons in any way, daughters have contributed equally in every field,” said Swami.

She further added that she felt like a victim in her childhood because of the taunts of her family and people around her. That is how, she added, she decided to spread awareness on women’s rights and gender equality.

Music is by Dilip Tahir and Amit S. Trivedi.