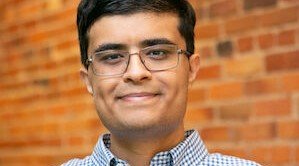 Yasa Baig, a senior at Duke University, is also one of the 2022 Marshall Scholars. (duke.edu photo)

The Marshall Aid Commemoration Commission this month announced the winners of the 2022 Marshall Scholarships chosen by the eight regional committees.

Approximately 40 Marshall Scholarships are awarded each year to high-achieving American students to pursue post-graduate studies at any university in the UK in any field. The award covers all university fees, cost-of-living expenses and many other costs. They will begin their graduate studies in September 2022.

Named for former U.S. Secretary of State George C. Marshall, the scholarship program began in 1953 as a gesture of gratitude to the American people for the assistance offered to the U.K. after World War II under the Marshall Plan.

*Rohit Goyal of Yale University earned a B.A. in economics at Yale and was elected into Phi Beta Kappa. As a senior, he led Yale to a victory in the Federal Reserve Board’s National Fed Challenge, an undergraduate team competition in which the students analyze economic and financial conditions and formulate a monetary policy recommendation, according to a yale.edu news release. He also began a discussion series on economic policy for students and faculty.

*Akhil Rajan, also of Yale, earned a B.A. and M.A. in political science at Yale. He studies spatial inequality in the context of both political and economic divides. In the past, he has worked on policy for campaigns at the local, Senate, and presidential levels, was well as in his work as a fellow of the Kerry Initiative at Yale, an interdisciplinary program that tackles pressing global challenges, and as a political appointee in the U.S. Department of Agriculture in the Biden-Harris administration.

In his academic research, Rajan has studied the effects of gerrymandering, the political behavior of underrepresented candidates, and the impacts of campaign finance on American democracy, noted the release.
*Yasa Baig of Foxborough, Massachusetts, is a senior at Duke University. According to today.duke.edu, Baig, a physics and computer science double major with a minor in mathematics, is an Angier B. Duke scholar and was awarded the Goldwater Scholarship earlier this year for his scientific research.

*Baig is also the co-founder and chief software engineer of the Duke Applied Machine Learning Group, one of the largest student software and machine learning engineering groups in the U.S. When COVID 19 caused the loss of many computer science student internships, Baig and his colleagues at DAML founded the Phoenix Project which paired more than 200 students with new, virtual internships, noted the report.