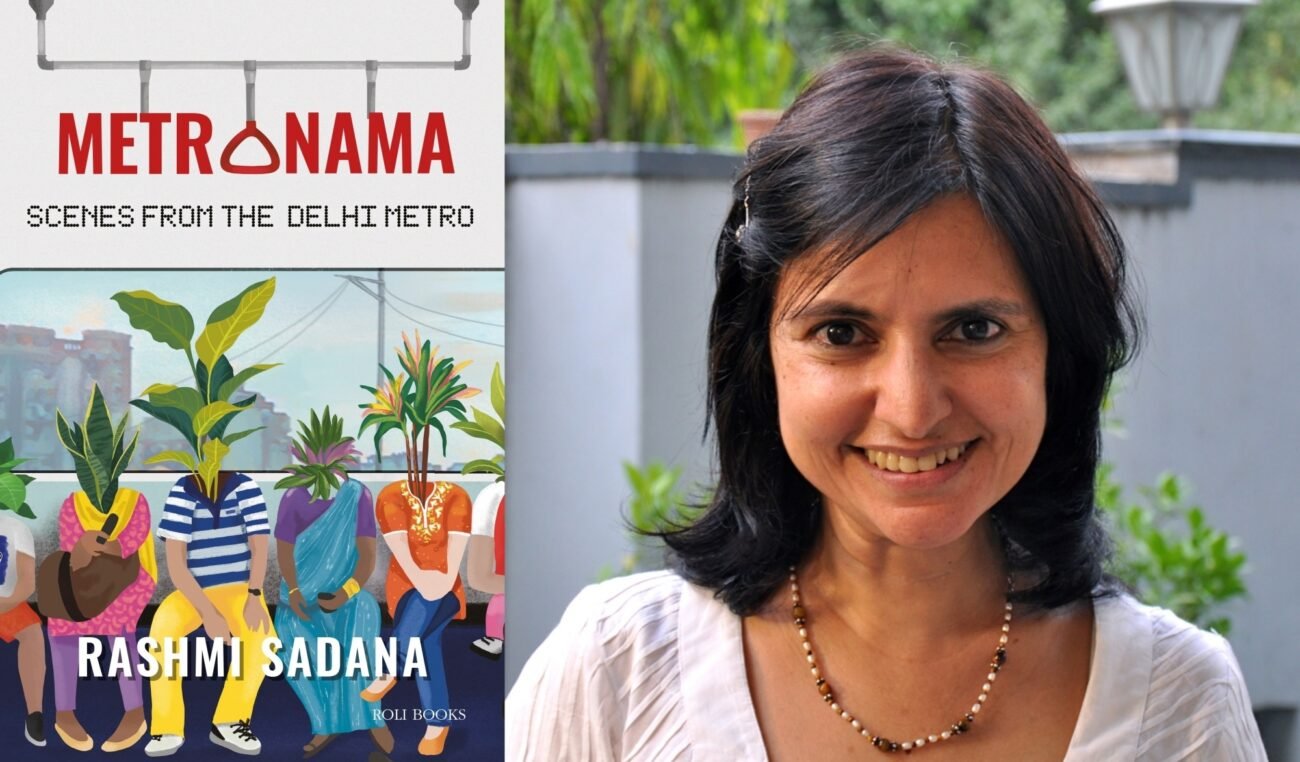 The form of the book mimics the stops and starts of the Delhi metro itself (IANS photo)
By VISHNU MAKHIJANI
CHARLOTTESVILLE, VA – When an urban anthropologist from a US university trains her eye on the Delhi Metro and goes into its social dimensions and intricacies, you can be sure of not just “a blurring of the static and the kinetic, but a relationship between them, a meeting of multiple mobilities”.

The outcome is “Metronama” (Lotus/Roli) by Indian American Rashmi Sadana, an associate professor of anthropology at Virginia’s George Mason University, who spent five years in India on teaching assignments in New Delhi and Chennai but most of them in the national capital, extensively travelling on the system and sharing the “experiences of Metro riders and how those experiences intersect with larger issues of urban planning in Delhi”.

“The idea for the book came when I first rode the Delhi Metro in 2006. I was a joy-rider like so many others but also an urban anthropologist. I immediately knew the Metro would be my next project. It was a real “a-ha” moment. I thought, this Metro is going to be a game-changer for so many people in the city, and it’s also going to change how the city looks and feels,” the Indian American said.

“I knew that I wanted to research and write about the social impact the Metro would have. As a woman who has gone around Delhi on foot, in auto rickshaws, in buses, and in cars for decades, I also knew that for women especially this was going to increase their sense of mobility and freedom in the city. That was exciting,” she added.

Delhi, she said, “is often portrayed either as a rich city of powerful bureaucrats and politicians or as a poor city of slum dwellers” and so she focused on “the in-between sectors and their social mobility and aspirations. We hear a lot about the aspiring middle classes in India, and those are the kinds of people who I talked to on the trains”.

She also studied the metro as it was expanding, describing the physical impact that each new construction phase of the metro had on “a changing city on the move”.

“What I loved most about writing this book was how it enabled me to write about so many parts of the city, such as Lajpat Nagar (where I lived when I was doing the research for the book), Defence Colony, Greater Kailash, Hauz Khas, Jangpura, Nehru Place, Okhla, Mandi House, Dwarka, Old Delhi, Vasant Kunj, Saket, and metro stations all the way to the ends of the lines in Haryana and Uttar Pradesh, including Noida and Gurugram.

“I covered posh and less posh areas, formal colonies and informal settlements, crowded and less crowded places. In some scenes in the book, I’m sitting talking to someone in Dilli Haat or at a Cafe Coffee Day in Connaught Place or South Ex, and in others I’m walking in the lanes of Trilokpuri or am sitting outside next to cow dung patties in Mundka. This is Delhi, and the book shows how all these places are connected,” Sadana explained.

“For some Dilliwalas, the novelty of riding the Metro came from the fact that it was in India, and they could compare it to what they had only ever experienced abroad, in cities like London or Singapore. For most in the city, it was their first experience of high-speed underground rail travel. For still others, it was the first time they had ridden an escalator. For all, the system had rearranged city space and their experience of time. In this solid state-of-art structure, a new form of fleetingness took shape, a multitude of instances, a moving city,” Sadana writes.

Describing Delhi as a “desert city inside a bowl” on the vast Indo-Gangetic Plain, she writes: “The Aravali mountain range lies to the southwest of the city, gaining stature as it breaks away from the Ridge, a monkey-filled forested area in North Delhi where people stroll in the mornings and evenings, sticks in hand. With the Ridge and the city’s many parks and green spaces, Delhi can feel both lush and dry depending on the season and where you are in the city. Delhi has the largest square acreage of any city in India, incorporating villages and wildlife, as well as diverse sensibilities, from rural mind-sets to middle-class aspirations and globalised consumerism. The metro joins and cuts across these spaces.”

Then, the metro “makes a private relationship public, as public transport is also a moving picture of social relationships, sometimes laid bare. In this case, where Metro and digital platforms intersect, there is a capacity of the metro as a public space to spark debate on issues that on the surface have nothing to do with the transport. Yet two mobilities, two kinds of movement are for an instant juxtaposed and captured on film. And with it, the great anxiety that exists about who is moving up in the world and who is staying in place”, Sadana writes.

What unfolds in the space of the metro “is not just a blurring of the static and kinetic, but a relationship between them, a meeting of multiple mobilities” and yet not quite a “cultural” experience in the way some streets and bazaars are.

“There are more things that you cannot do (spit, smoke, eat) than you can do. And there are those things you are told not to do (stop the door with your hand, take photographs, befriend strangers) than you do. It is a public space and yet still a space apart,” Sadana points out.

The 264-page book comprises 75 short stories or “scenes” so that “readers can read (it) in little bits, scene-by-scene”, Sadana said during the interview.

“The form of the book mimics the stops and starts of the metro itself. My point is to relay the brevity and quickness of metro rides alongside the heaviness and depth of such a transport infrastructure. So, in a way, readers will experience the book as people in Delhi experience the metro,” Sadana concluded.