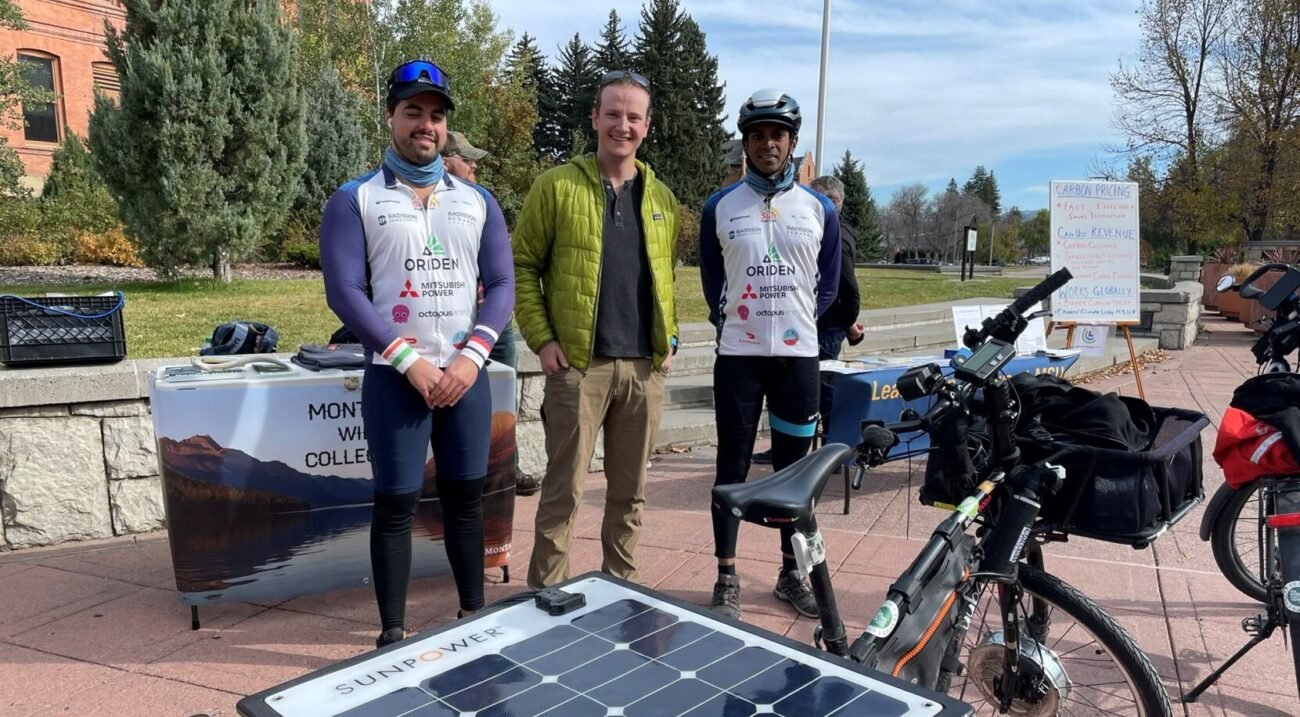 Sushil Reddy on his SunPedal ride in Montana. (Twitter photo/@SunPedal_Ride)

DEMING, N.M. (AP) – A record holder in the Guinness Book of World Records has set off on a new quest through the United States in hopes of encouraging others to learn more about solar power and help save the planet.

Back in 2016, Sushil Reddy and a group of students from the Indian Institute of Technology-Bombay embarked on a trip on electric-powered bicycles, or e-bikes, that covered nine Indian states. Seventy-nine days later and more than 7,000 kilometers (4,350 miles), Reddy and his crew set a new world record for the longest journey on a motorized bike.

Reddy equipped his e-bike with solar panels that allowed him to cover extensive stretches of road without recharging and less manpower.

A veteran of long journeys, Reddy also travelled through three European countries and a part of the United States’ West Coast on a solar-powered e-bike. The total solar-powered bike adventures covered 11,811 kilometers (7,339 miles) in 139 days.

Reddy graduated with a degree in engineering from IIT-B and used his field of study in renewable energy resources to build the harness for solar panels that would power his e-bike. The constant surge of power cut Reddy’s manpower by 50%.

His visits through the U.S. include educating people on the benefits of solar energy and how it ties into clean energy and ultimately helping to save the planet.

Joining Reddy on the adventure is Luis Fourzan. They began their journey in Winston-Salem, North Carolina, and expect to finish in Houston.

“Me and my co-rider, Luis, are currently doing a 6,000-plus mile journey as a cause to raise awareness on solar power and e-bikes,” Reddy told the Headlight during a stop in Deming on Dec. 16.

The pair reached El Paso, Texas, after 125 days and 5,500-plus miles (8,851-plus kilometers) of riding, he said. They planned to complete the route after the Christmas break.

The personal drive for Reddy’s adventures stem from his realization that people in his native country knew little about the resources available with solar power. Through seminars and workshops along his travels, Reddy and Fourzan hope to better educate and bring options to the people they encounter along their journey.

Fourzan says that solar power is a source of energy that has many uses for households.

The duo also is collecting information along the journey on how the states utilize solar energy. They share their knowledge with communities along the way.

“The sun is one of the resources that we will have forever. We can harness it across the planet,” says Fourzan.