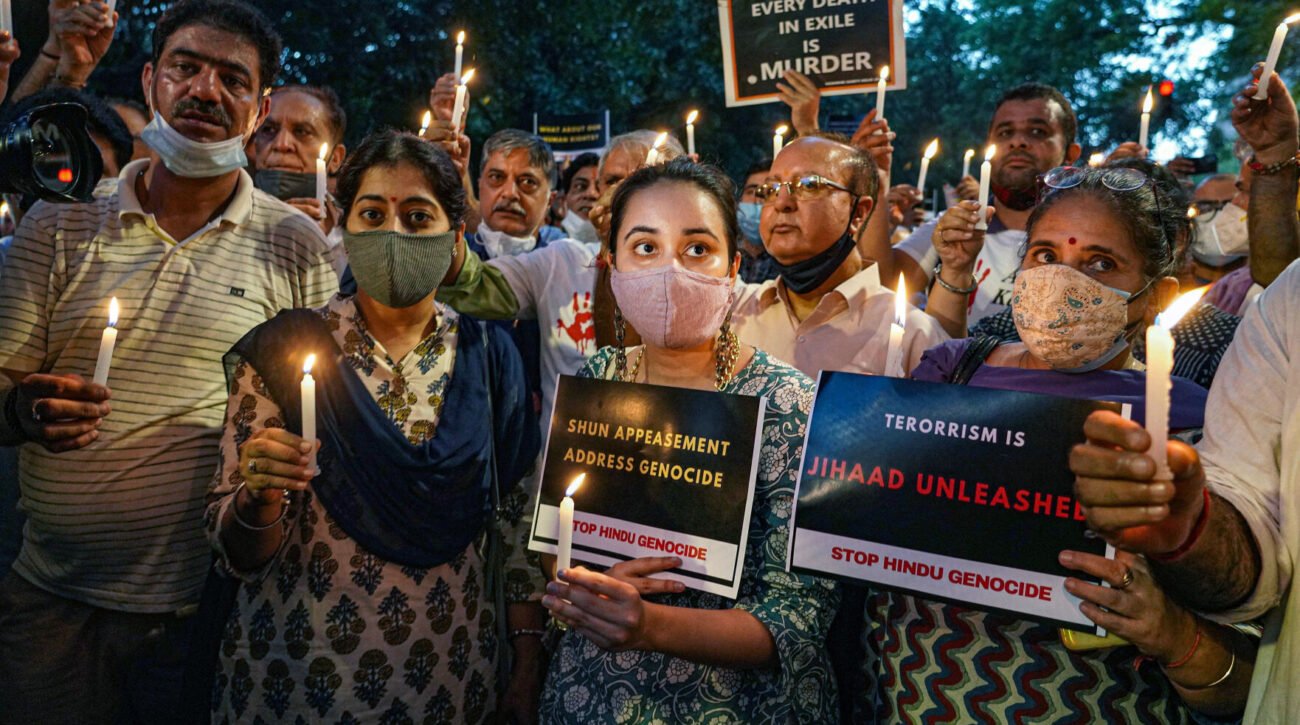 Members of various Kashmiri groups hold placards during a candle march over the killing of Hindu minorities in Kashmir Valley, at Jantar Mantar, in New Delhi on Oct. 9. (ANI photo)

Assailants fatally shot three Hindus and a Sikh person in the region’s main city of Srinagar this week in a sudden rise in violence against civilians that both pro- and anti-India Kashmiri politicians widely condemned.

Local police blamed the spate of killings on militants fighting against Indian rule in the region for decades. Officials said they had detained in the last three days over 500 people across the Kashmir Valley for questioning, with the majority of detainees from the main city of Srinagar.

Police say militants belonging to The Resistance Front, or TRF, rebel group have shot and killed seven people since last week, pushing up the death toll from such attacks this year to 28 people. While 21 of those slain were Muslims, seven of them belonged to Hindu and Sikh minority communities.

Speaking with reporters recently, the region’s top police officer Dilbag Singh described the killings as a “conspiracy to create terror and communal rift.”

On Oct. 7, TRF in a statement on social media claimed the group was targeting those working for Indian authorities, and was not picking targets based on faith. The rebel group’s statement could not be independently verified.

Indian officials say TRF is the local front for Lashkar-e-Taiba militant group that is based in Pakistan. The cell was formed after India stripped in 2019 the region of its semi-autonomous status, scrapped its statehood, and undertook a massive security and communications lockdown for months. Kashmir has remained on edge ever since as authorities also put in place a slew of new laws, which critics and many Kashmiris fear could change the region’s demographics.

Last week’s killings appeared to trigger widespread fear among minority communities, with many Hindu families opting to leave the Muslim-majority Kashmir Valley. Those killed included a prominent Kashmiri Hindu chemist, two schoolteachers of the Hindu and Sikh faiths, and a Hindu street food vendor from India’s eastern state of Bihar.

According to police, those detained in the ensuing crackdown include members of religious groups, anti-India activists and “overground workers,” a term Indian authorities use for militant sympathizers and collaborationists.