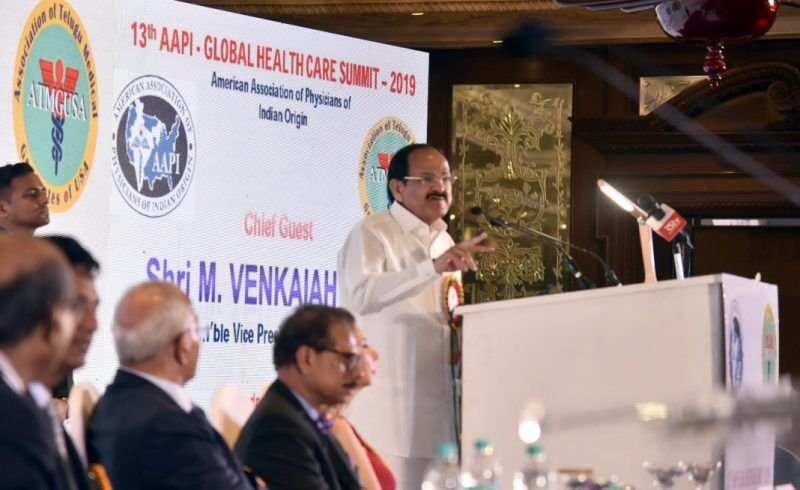 Venkaiah Naidu at the Global Healthcare Summit in 2019. The theme for the summit in 2022 will be ‘Prevention Is Better Than Cure Through Technology, Telemedicine & Transformation’, said AAPI’s Indian American president Anupama Gotimukula. (photo provided)

India’s Vice President Venkaiah Naidu will be the chief guest at the annual Global Healthcare Summit 2022, organized by the Association of American Physicians of Indian Origin, to be held at the Hotel Avasa in Hyderabad, India, Jan. 5-7, 2022, Anupama Gotimukula, Indian American president of AAPI, has announced.

“Harnessing the power of Indian doctors worldwide, the AAPI Global Healthcare Summit platform has evolved with the support and collaboration with the Indian Ministry of Health and Family Welfare as well as several prominent global and Indian medical associations,” said Gotimukula, according to a press release.

“The theme for the summit this year is: ‘Prevention Is Better Than Cure Through Technology, Telemedicine & Transformation’ and we want to coordinate and collaborate all our resources towards helping India have established annual healthcare screening guidelines and development of ‘India Preventive Task Force’ who will maintain and update the annual healthcare screening guidelines,” she added.

Senior leaders from leading healthcare organizations such as pharmaceuticals, device and medical equipment manufacturers and major medical teaching institutions, hospitals and from the ministries – Health, External/Overseas Affairs – and regulatory bodies are collaborating with AAPI with the ultimate goal to provide access to high quality and affordable healthcare to all people of India, she said.

Dr. Ravi Kolli, president-elect of AAPI, pointed out, “Healthcare in India is one of the largest sectors, in terms of revenue and employment. India is making significant improvements in the healthcare infrastructure and is building modern medical facilities throughout India. Indian doctors have made tremendous progress in the 21st century and India is now being touted as a medical tourism hub.”

“Being organized at this critical phase, GHS 2022 is aimed at exploring possibilities for greater collaboration and cooperation between the physicians and health care providers in India with those of Indian origin and major health-care providers abroad,” Gotimukula noted in the release.