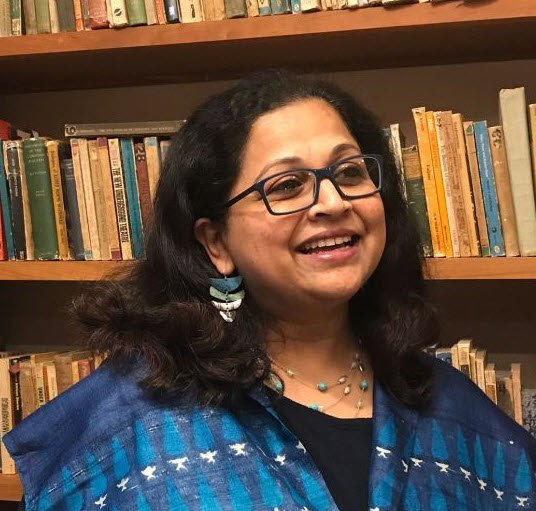 DURHAM, NC – Leela Prasad, Professor of Religious Studies at Duke University, has been elected Vice President of the American Academy of Religion (AAR).

The leadership role, reports said, puts Prasad in a lead position to serve as president-elect next year and on track to head the body, the following year.

The AAR is the flagship global organization of the academic study of religion and allied fields. Founded in 1909, it has more than 8,000 members from across North and South America, Asia, Africa, and Europe. Prasad will be the fourth Asian American woman and the third faculty member from Duke’s Department of Religious Studies to lead this organization in its 113-year history.

Prasad’s primary interests are the anthropology of ethics, with a focus on South Asia, colonialism & decoloniality, prison pedagogy & Gandhi, and religion & modernity. Her work is at the intersections of religious studies, anthropology, history, and literature.

Her first book, “Poetics of Conduct: Narrative and Moral Being in a South Indian Town,” explored how everyday stories, performance, and routine practices reveal ethical imagination and discourse. The book was awarded the “Best First Book in the History of Religions Prize” by AAR.

Prasad’s recent work, “The Audacious Raconteur: Sovereignty and Storytelling in Colonial India” from Cornell University Press, builds an archive from the unofficial anthropology and literary writings of three little-known Indian scholars in late colonial India, and from the recorded oral narrations of a Goan Christian ayah to show how even under the most oppressive rule, storytellers and artists assert cultural independence and ultimately remain sovereign.

Prasad is currently co-directing an ethnographic documentary film called ‘Aftertones: Moved by Gandhi,’ a film that explores the poetry of ethical resonance.

She has received fellowships and awards from the National Endowment for the Humanities, the American Philosophical Society, the American Academy of Religion and the Fulbright program.