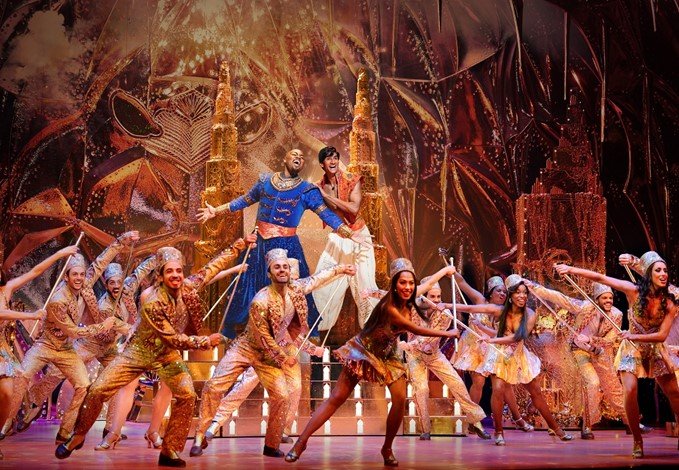 Having a healthy obsession with Aladdin isn’t all that abnormal. As a young boy growing up in central NJ, Michael Maliakel was proud to be among the healthily obsessed, “my family had the [Aladdin] bed sheets, the lunch boxes and pajama sets,” the actor remembers fondly. “There was nothing casual about our household’s obsession with the film. My brothers and I wore out our VHS tape of Aladdin.”

Never would Maliakel or his Aladdin-enabling family dream that, one day, Maliakel would go on to become Aladdin. But last year, Maliakel—who made his Broadway debut in the 2017 world premiere musical adaptation of Monsoon Wedding—got the call equivalent to a wish from a genie.

Maliakel says “the whole thing was very surreal. A lot of people ask me if this was a dream role for me, starring on Broadway, and for so many years I didn’t allow myself to have that kind of dream because I didn’t want to get myself heartbroken. It’s hard to be the first person to do these things. There were so few people who looked like me succeeding in this business.”

Maliakel and his two brothers grew up not far from The Great White Way in Hamilton, NJ, to immigrant parents from Kerala. He caught the performance bug at an early age, initially immersing himself in choral and vocal chamber music before turning to theater in high school.

Q: When you decided to be a performer, how did your family and friends react?

A: When I got the role of Aladdin specifically, I honestly think my family was more excited than me, if that’s even possible. My mom was the one that would drive me to my piano lessons that really scraped the pennies together for my first voice lesson and has been my champion in this field from the get-go. I feel that this moment is for her as much as it is for me.

Q: What do you love about your character?

A: This movie and this source material has been a foundational part of my childhood. Like Aladdin, we Indian Americans all share that sense of needing to prove ourselves; that we are worthy to take up these spaces that we are just as capable as filling these roles, of selling out gigantic theaters, and drawing crowds and telling beautifully rich, deep stories that encompass the whole human experience. In that respect, Aladdin’s story is sort of my story.

Q: What is your favorite Aladdin song and why?

A: The song “Proud of your Boy” is really special to me because Aladdin’s really just striving to make his mom proud. I certainly feel that responsibility. I hope that everything I do, makes my parents proud.

Q: How do you get hyped up before a show?

A: I am lucky enough to play the title character every night and he is basically onstage the whole time. There is singing, dancing and fight choreography. It requires a kind of athleticism. My goal as an actor is to be consistent with his performance so that all the audiences get the same top notch caliber theater experience every night. The things I eat, how much I eat, what the weather is like, if I was up too late the night before, all these things contribute to how the show goes. One must think about singing and dancing and acting as a physical sport for Broadway. Your body is the instrument. And so everything I do everything I put into my body influences my performance, and also how easy or hard it is for me to do my job every day.

Q: What advice do you have for young people just starting their careers in relation to musical theater?

A: Don’t wait for an invitation. Don’t wait to be given permission. I think for so long I wouldn’t allow myself to entertain these big dreams because it seemed like spaces I wasn’t welcome in or designed for people like me. I put off for a long time committing to this art form because I didn’t want to put all my eggs in one basket without any example of what it might look like. Your voice deserves to be heard; you deserve to take uptake up these spaces. My hope is that being onstage at the New Amsterdam is that young children will show up and have the fuel to dream big and know that these opportunities are there for them and that they deserve to take up these spaces.”

See ‘Aladdin’ on Broadway at the New Amsterdam Theatre in NY. For more information on tour dates visit: aladdinthemusical.com.