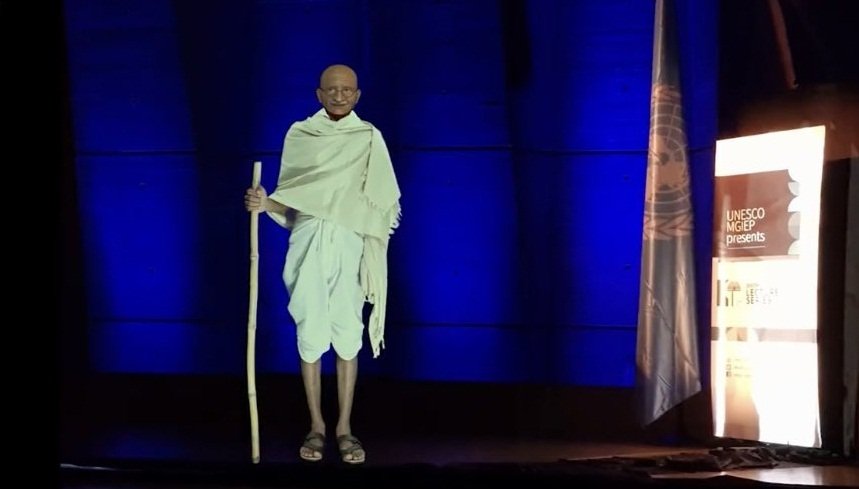 He came as a holographic avatar, to animate a discussion on “Education for Human Flourishing” at the UN’s observance of the International Day of Nonviolence.

And while he spoke of education creating new people and a world of peace, at the nearby Security Council chamber mighty nations were clashing over an intractable war and its violence on September 30.

India’s UN Mission and UNESCO’s Mahatma Gandhi Institute of Education for Peace and Sustainable Development brought him to the UN for the observance of the International Day of Nonviolence, and who better to learn nonviolence and the education for the creative change it inspires.

A life-size, speaking, gesticulating presence on the stage, the avatar provoked, prodded, and challenged a panel made up of an activist, a diplomat, a youth, and an economist to delve into the meaning of education for humanity.

The avatar was created with digital graphic files merged with motion graphics to produce the high-definition hologram that spoke authentic, researched statements made by the Mahatma himself in the context of the topic.

“We want to provide only such education as would enable the student to earn more. We hardly give any thought to the improvement of the character of the educated. Schools and colleges and really a factory of turning out clerks for the government,” Gandhi’s words reverberated.

“On the contrary, real education consists in drawing the best out of yourself. What better book can there be than the book of humanity?” The Gandhi avatar also questioned the value of even literacy if it is without values.

“Literacy is not the end of education or even the beginning,” the avatar repeated his words. For him, education meant “an all-round growing” bringing out the best in the child’s “body, mind and spirit”, spiritual training and “education of the heart, the training of the Spirit”.

India’s Permanent Representative Ruchira Kamboj, who was a panelist, summed it up saying that Gandhi “was very big on holistic education” and “education for the upliftment and dignity of all”.

Bernice King, the daughter of Gandhi-inspired civil rights icon Martin Luther King, said that for her father the “chief aim of education was to save people from the morass of propaganda”. He said that education’s “function, therefore, is to teach one to think intensively and critically, but if it stops with efficiency, it may prove the greatest menace to society”. But changing the education system is going to take “some radical action” when a “critical mass of people decide, let’s organize, mobilize and strategies and begin to make demands”. She said in the footsteps of Gandhi and King, the people would have to resort to nonviolent resistance and noncooperation to bring about the change.

Princess Hayu, the daughter of Sultan Hamengkubuwono X of Yogyakarta, Indonesia, and youth representative of digital education transformation, said that “each culture has its own local wisdom” even though the underlying values are universal.

Omar Hilale, the Permanent Representative of Morocco said, Gandhi inspired the “constitutional building of our nations and of the United Nations” because “his notion is that peace can be achieved in a very unique manner, nonviolently and with extreme courage, and sacrifice and tolerance”.