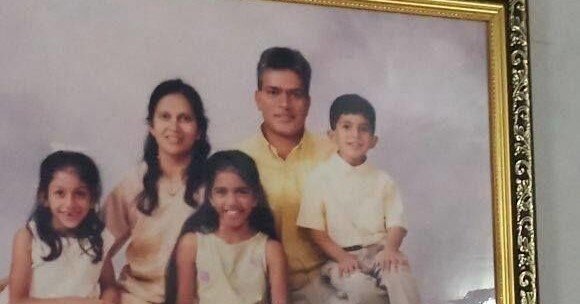 A memorial page had been set up on Facebook to pay homage to Indian American psychiatrist Achutha Reddy (top, 2nd from right, in photo with family), who was fatally stabbed in his Wichita, Kansas clinic. (Facebook memorial page photo)

WICHITA, Kan. — A 25-year-old man has pleaded guilty to first-degree murder in the 2017 death of an Indian American Wichita doctor who was stabbed more than 160 times.

Prosecutors have said police were called to the Holistic Psychiatric Services clinic that night and found Reddy’s body in an alley outside the business. Investigators said Dutt had entered the clinic with Reddy and assaulted the doctor inside an office before being interrupted by an office manager who heard the commotion. Reddy then fled the building, but Dutt caught up with him in the alley.

Investigators had said Dutt was a client of Reddy’s and that Reddy had been stabbed about 165 times. The doctor also appeared to have suffered blunt force trauma and may have been run over by a vehicle.

Dutt is scheduled to be sentenced on Nov. 9.

India-West Staff Reporter adds from an earlier India-West report: Lt. Todd Ojile, section commander of the homicide division at the Wichita Police Department, told India-West shortly after the attack that no motive had been established for Dutt’s slaying of Reddy. (See earlier story: https://bit.ly/2FKQGMw)