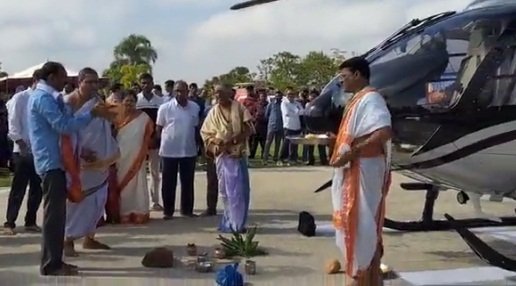 HYDERABAD, (IANS) – People bringing their newly purchased two-wheelers and four-wheelers to temples for ‘vahan puja’ (vehicle puja) is a common sight but this businessman from Telangana took his newly bought helicopter to a temple for performing the rituals.

Boinpally Srinivas Rao, owner of Prathima Group along with his family members flew in Airbus ACH-135 to Sri Lakshmi Narasimha Swamy temple at Yadadri, about 100 km from Hyderabad, for the special puja.

Guided by three priests the family performed various rituals in front of the helicopter, which is said to be priced at $5.7 million. The visuals of ‘vahan puja’ with the helicopter have gone viral on social media.

Former governor of Maharashtra Vidyasagar Rao, a relative of Srinivas Rao, was also present. Later, they took a sortie around the popular hill shrine.

Prathima Group has a presence in infrastructure, energy, manufacturing, telecom sectors and owns a medical college and chain of hospitals.