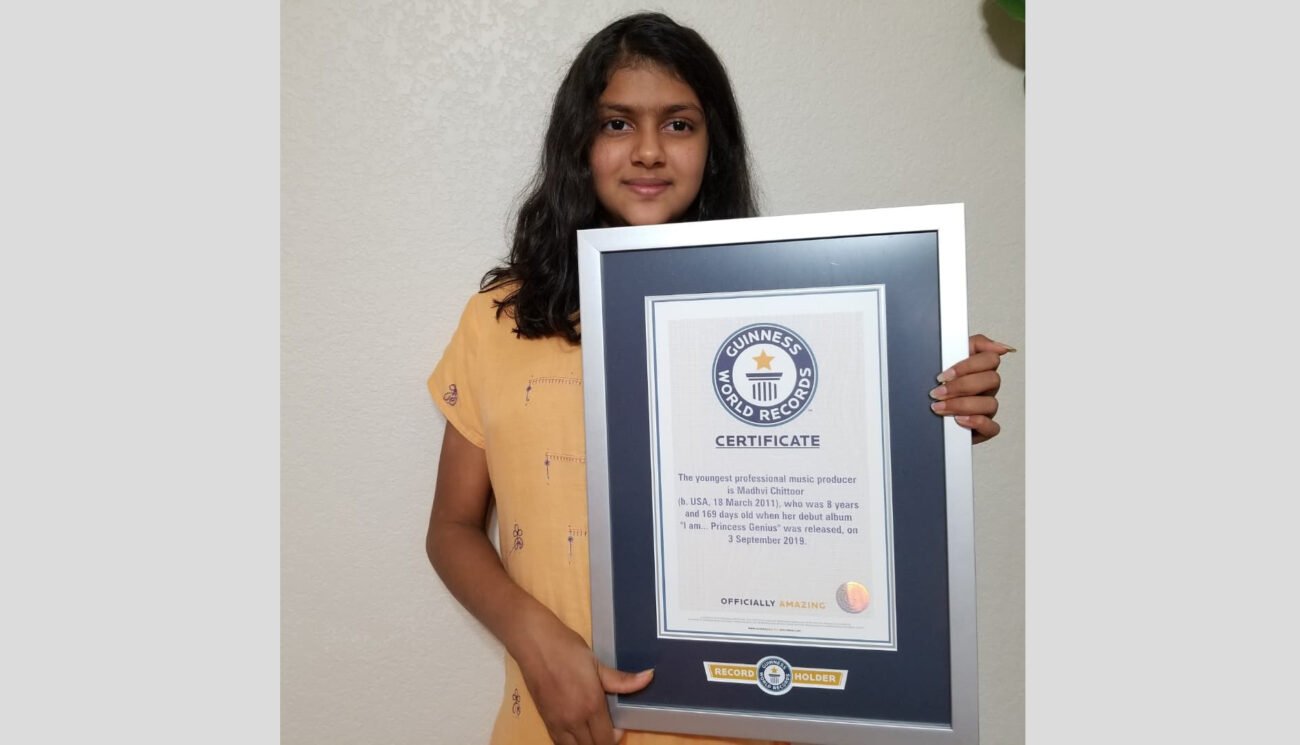 ARVADA, CO – Eleven-year-old Indian American Madhvi Chittoor now appears in the Guinness World Record as the youngest music producer. This youngster has been a composer since the age of four and has had, as far as anyone can remember, an innate ability to play any song, identifying its notes just by hearing it. Chittoor developed a love for music early on and today plays many instruments including piano, violin, cello, clarinet, recorder, trumpet, and guitar.

She started learning the piano at age four and began making her own music. She explained to those asked, that she “hears music.” Her proud mother Lalitha adds that at the age of 6 she got international social media recognition from world renowned movie composers like Lorner Balfe, Hans Zimmer, Director Ron Howard, Nat Geo Genius for her album “Princess Song”, her first composition and another work, “Genius”. The titles were meant to empower girls that they can be both beautiful and intelligent. The album is available in Amazon music, Apple, Spotify and other music streaming sites.

Her compositions like “A cowgirl who loves to play guitar,” and “Harmony with Nature,” are complete with details of dynamic notations, articulations, lines like crescendo, diminuendo, and so forth. The three-movement sonata “Harmony With Nature” resonating with her love for nature and Climate Change activism was inspired, when she was 6, by the animal costumes and masks that children and adults wore for the Halloween Fair at her school.

Her composition – “Glory to John Williams – My Hero” too has received many awards including the Colorado State Level Award for music composition. In July 2018, she performed at St Mark’s Piazza and in the Vatican in Italy, her own composition “Joy Within Reach”.

In May 2020, at the age of 9, she received the National Award in the Reflections competition for her composition, “Look within – Atman Inquiry.”

She is the author of the book, “Where Does the Cowgirl Live?”

She has been appointed to the UN Children Advisory Team to formulate the General Comment No. 26 which is guidance to the governments to safeguard children’s rights affected by environment and climate crisis.

Chittoor plans on releasing her second music album next year.

The child of immigrant parents from India – who have no background or particular knowledge of music – plans on becoming a music director. She says she would like to score for films just as Lorne Balfe, Hans Zimmer, John Williams in Hollywood and Ilayaraja, A.R. Rahman and Anirudh in South Indian cinema.