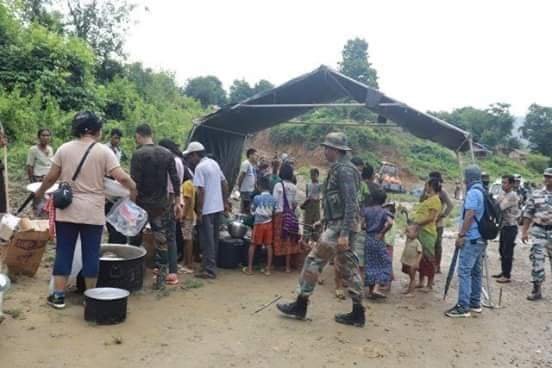 AIZWAL (IANS) – The northeastern states of India, especially Mizoram, still bear the brunt after a military coup was declared in neighboring Myanmar on February 1 last year.

Mizoram’s lone Rajya Sabha member, K. Vanlalvena, said that following the violent clashes between the Myanmar army and the civilian defense forces in Chin state of the neighboring country, the number of Myanmarese crossing over to the bordering Indian state has risen to over 20,000.

Officials in Mizoram, however, said that over 24,300 Myanmar nationals, including women, children and political leaders, have taken shelter in Mizoram since the state of emergency was declared in Myanmar, where power was seized by General Min Aung Hlaing after President U Win Myint and State Counsellor Aung San Suu Kyi were detained by the military on February 1 last year.

In Manipur, around 30 Myanmar nationals were detained while many were deported to that country after the coup-hit people tried to take shelter in India.

Mizoram officials said that intermittent clashes between the Myanmar Army and the civilian groups in the trouble-torn nation forced men, women and children to cross over through the forested and riverine routes and seek refuge in the Indian states.

According to the United Nations High Commissioner for Refugees, more than 1,35,000 civilians have been displaced in Myanmar because of the fighting, and given the more recent military operations in Karen and Kayah states, the current figures may be twice as high.

As per the Assistance Association for Political Prisoners (AAPP), a non-profit body, 1,503 people have been killed in the demonstrations since the military regime came to power in Myanmar.

Suu Kyi is one of more than 10,600 people who have been arrested by the Junta since February last year, according to AAPP.

The Union Home Ministry had earlier sent out an advisory to four northeastern states — Mizoram, Manipur, Nagaland and Arunachal Pradesh — which share a 1,640-km unfenced border with Myanmar, saying that the states and UTs have no power to grant “refugee” status to any foreigner, and India is not a signatory to the UN Refugee Convention of 1951 and its 1967 Protocol.

Since the coup overthrew the democratically elected government and the subsequent arrest of leaders, there have been widespread protests, armed resistance and mass killings in Myanmar.

However, according to media reports, the Junta’s power base is slowly eroding due to widespread discontent with an ‘oppressive’ institution determined to remain in power with massive violence, desertion of government and public officials and reported casualties on its side.

Experts on foreign relations and political commentators said that on the Myanmar crisis, India was caught in a dilemma due to geo-political strategies, its ‘Act-East Policy’ and bi-lateral cooperation.

International relations expert Dipikanta Chakraborty said that during and after the 1971 Bangladesh liberation war, India gave shelter to lakhs of Bangladeshi refugees, but Rohingyas and tribals from Myanmar were not officially sheltered by the Indian government.

“About the shelter of Myanmarese in Mizoram, there are differences of opinion between the state government and the Centre. Insurgency is one of the issues of this disagreement,” Chakraborty, a professor at Tripura’s Ambedkar College, said.

She said the China factor is a key part of India’s neighborhood policy.

“The strategic location of Myanmar forced India to remain silent over the development in the neighboring country. Besides linking ASEAN, India has some economic and connectivity related interest with Myanmar,” said Chakraborty, who had earlier done an in-depth research on ‘Stratetegic Importance of Tripura from the Mirror of India’s Bangladesh Policy’.

In Mizoram, the majority of those who have taken shelter belong to the Chin community, also known as the Zo community, who share the same ancestry, ethnicity and culture as the Mizos.

A total of 143 relief camps have been set up in different districts by the Young Mizo Associations (YMA) and churches.

The Myanmar nationals took shelter in all the 11 districts of the state with Siaha district housing the highest at 8,381, followed by Champhai (5,925) and Lawngtlai (5,409).

Earlier, Reddy, while talking to the Mizoram MPs, had indicated to treat the Myanmar refugees as “tourists”, not refugees.

Chief Minister Zoramthanga had written several letters to Prime Minister Narendra Modi, urging him to provide relief, required aid and asylum to the Myanmar nationals as the state government was facing a financial crisis to deal with the Covid-19 pandemic and related problems.