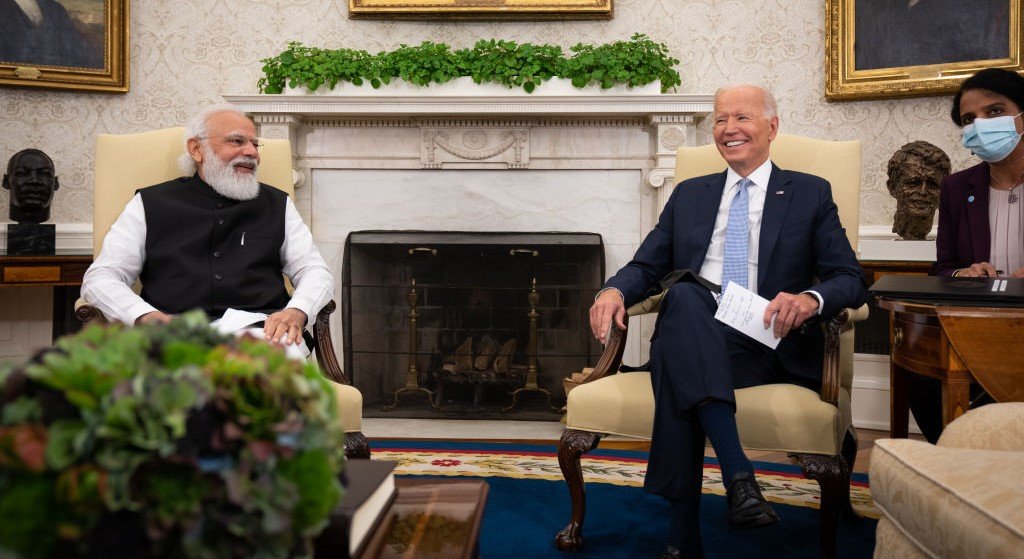 WASHINGTON – U.S. President Joe Biden said Sept. 24 that ties between the U.S. and India can help in solving “a lot of global challenges.”

In his opening remarks as he met Indian Prime Minister Narendra Modi in the Oval Office at the White House for bilateral talks, Biden recalled that in 2006, when he was the U.S. vice president, he had said that India and the U.S. will be among the closest nations in the world in 2020.

“I have long believed that the U.S.-India relationship can help us solve a lot of global challenges. In fact, back in 2006 when I was the vice president, I said that by 2020 India and the U.S. will be among the closest nations in the world,” Biden said, according to an ANI report.

Biden said that the relationship between India and the U.S. – the largest democracies in the world – is destined to be stronger, closer and tighter, the Indian Express reported. “Four million Indian Americans make the U.S. stronger every day,” Biden told Modi.

Modi, who received a warm welcome from the U.S. president, said that the seeds have been sown for an even stronger friendship between India and the U.S., the Indian Express report said. “Today’s bilateral summit is important. We are meeting at the start of the third decade of this century. Your leadership will certainly play an important role in how this decade is shaped,” Modi told Biden.

The prime minister in his remarks said that technology is becoming a driving force.

“We have to utilize our talents to leverage technology for the greater global good,” he said.

This is the two leaders’ first in-person meeting since Biden took office as president early this year.

Modi extended his gratitude to Biden for a “warm welcome.”

“I would like to extend my gratitude to President Biden for the warm welcome not only to me but my delegation,” he said in his opening remarks.

Highlighting the importance of business ties between the two countries, Modi told Biden that there is much to be done in the field of trade.

Modi said the U.S. president is taking initiatives to implement his vision for bilateral relations. He further added this decade will be shaped by talent and people-to-people linkages.

“I am glad the Indian diaspora is making an active contribution towards USA’s progress,” prime minister said.

Moments before his meeting with Modi, Biden in a tweet said he is looking forward to strengthening the deep ties between the two countries.

“This morning I’m hosting Indian Prime Minister Narendra Modi at the White House for a bilateral meeting. I look forward to strengthening the deep ties between our two nations, working to uphold a free and open Indo-Pacific, and tackling everything from COVID-19 to climate change,” Biden said in a tweet.

Reviewing the Comprehensive Global Strategic Partnership between the two countries has been the agenda of the talks.

Since January, Modi and Biden have participated in three summits. Two of them were hosted by President Biden – the Quad virtual summit in March and the Climate Change Summit in April which was also held virtually.

During the meeting Sept. 24, Modi praised Biden for his efforts in combating the COVID-19 pandemic, climate change, and promoting Quad.

“Soon after assuming the presidential office, the U.S. president made unique efforts on COVID-19 pandemic, Quad and climate change and I think his efforts will make a larger impact in the coming days.”

Modi said Biden is taking initiatives to implement his vision for India-U.S. relations.

After Biden said that the U.S. would celebrate Gandhi Jayanti, Modi said the Mahatma’s ‘trusteeship’ concept would be important for our planet in times to come.

“President Joe Biden mentioned Gandhiji’s Jayanti. Mahatma Gandhi always used to talk about trusteeship of the planet, a concept which is important for our planet in times to come,” Modi said during the bilateral talks, whose remarks came as both countries are firmly committed to work together in achieving ambitious climate and clean energy targets.

The crowd looked full of enthusiasm and holding banners and the Indian flag.

Local community members, meanwhile, have also prepared a pamphlet saying ‘American Welcomes Modi -2021’, which is being circulated over social media.