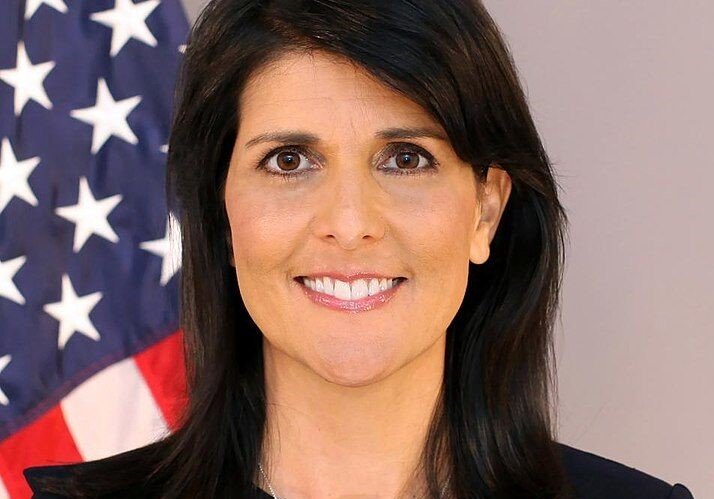 HARLESTON, S.C. (AP) — Former U.S. Ambassador to the United Nations Nikki Haley drew on her native South Carolina’s struggles with racist violence during her time as governor, arguing Dec. 2 that the Republican Party is best positioned to lead the country alongside a continued diversification of its ranks.

“Our message is the right message,” the Indian American former governor said during a speech in Charleston. “It’s a message of hope, a message of faith — faith in ourselves and our country. The more we spread that message, the more people we’ll add to the Republican tent.”

Haley’s remarks came at The Citadel, where a Republican group made her the first woman to receive its highest honor. The potential 2024 presidential contender and former South Carolina governor received the Nathan Hale Patriot Award, an honor that comes along with a replica Revolutionary War musket. Previous recipients include Donald Trump in 2015 — before he was president — as well as former White House adviser Steve Bannon in 2018 and then-Vice President Mike Pence last year.

Haley — whose parents immigrated to South Carolina from India — has been tapped by the Republican Party in an effort to showcase diversity within its ranks.

Along with fellow South Carolinian Sen. Tim Scott, the Senate’s sole Black Republican, she leads an advisory council to a national effort to diversify and grow the GOP. Last year, both South Carolinians had key speaking roles at the Republican National Convention. And both have frequently spoken openly about personal experiences with discrimination due to their skin color.

“South Carolina shows the way, as it so often does,” Haley said Dec. 2, mentioning the racist murders of nine Black parishioners at the hands of a white shooter in Charleston, the deadly shooting of a Black motorist by a white officer, and the lack of violent outbursts following the 2015 incidents.

“We came together to heal and make hard choices about our future,” she said.

But Haley has also frequently spoken of her immigrant family’s struggles in rural South Carolina.

“I was a brown girl, in a black-and-white world,” she has said. “We faced discrimination and hardship.”

As Haley ponders her next political steps, the setting — a fundraising gathering put on by The Citadel Republican Society, which advertises itself as “the largest Republican club in the South” — is among a series of well-worn stops for politicians seeking exposure among Republicans in the first-in-the-South presidential primary state.

Her speech in accepting the award marked her first public comments in South Carolina since leaving her post at the U.N., where she served the Trump administration from 2017 to 2019. Since then, Haley has written a memoir, set up a political action committee, weighed into down-ballot campaigns and visited early-voting states.

During that time, however, Haley has also been among ascendant Republicans uncertain of how to lead in a party grappling with the role Trump still plays within it, as well as how to approach the 2024 campaign cycle, given Trump’s tease of a possible future bid. Pressed by The Associated Press on that question in April, Haley committed to sitting it out if Trump seeks a second term.

The day after the Jan. 6 Capitol insurrection, Haley told Republican National Committee members that Trump had been “badly wrong with his words” and that “his actions since Election Day will be judged harshly by history.”

Mentioning Trump sparingly on Dec. 2, Haley credited the former president and the Republican Party with building “one of the hottest economies in American history” prior to the pandemic, arguing that returning control to the GOP would “set the stage for new jobs and bigger paychecks for American families.”

“Our students should never learn to be woke,” Haley said. “They should learn how to find work and live their best lives.”