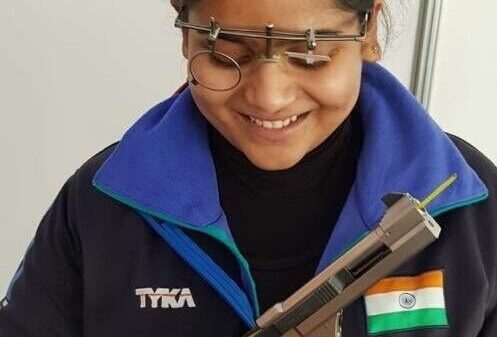 Shooter Rahi Sarnobat readies for the Olympics. (photo via IANS)

NEW DELHI — Rahi Sarnobat’s relaxed demeanor and her ability to withstand the most nerve-wracking situations is what sets her apart from many of her compatriots and rival competitors.

The scene is from the 2018 Asian Games in Palembang (Indonesia), where despite the air-conditioners running full blast, spectators at the arena were left sweating by the intensity of the competition.

India’s young Manu Bhaker had just wilted under pressure in the 25m sports pistol event finishing sixth, but Rahi, then 27, was smashing one target after another with pin-point accuracy. The deputy collector in the Maharashtra government finally went on to defeat her Thai opponent in the second shoot-off to win her maiden Asian Games gold.

Celebrations over, the Kolhapur shooter reached out to her German coach of Mongolian origin, Munkhbayer Dorjsuren — a two-time world champion — and hugged her.

Though Rahi had won gold at the 2014 Glasgow Commonwealth Games, few knew that she was on heavy medication to alleviate the pain in her left elbow. She did take part in the 2014 Asian Games at Incheon, clinching bronze, but vanished from the scene, no one knows where.

After a long steroid therapy and a laparoscopic surgery in 2016, it was the lessons in temperament and attitude ingrained in her by her German coach, which saw Rahi return to the Asian Games in 2018 and achieve glory.

“In 2016, I was put on steroids and in February the same year, I went under the knife. I missed the Rio Olympics quota cycle because of the injury and couldn’t qualify for the Games,” Rahi had said after winning the 2018 Asian Games gold.

With the meagre saving she was left with and the prize money received from the Indian government, she hired the German coach.

As the 30-year-old Rahi aims at Olympic glory in Tokyo, she is once again hitting top form, having clinched gold in the ISSF World Cup held recently in the Croatian city of Osijek. She is once again motivated and her driving force is the same German coach, Munkhbayer.

“Actually, she never gets excited. Maybe, it’s the books on philosophy Rahi keeps reading all the time,” Munkhbayer had said in 2018.

Rahi had silently walked out of the 2018 Asian Games shooting arena with her equipment bag and a fat book in hand. If she attains glory in Tokyo, India will have another shooting icon, but Rahi’s ‘philosophy’ will remain the same — a steely resolve and an unflinching temperament.