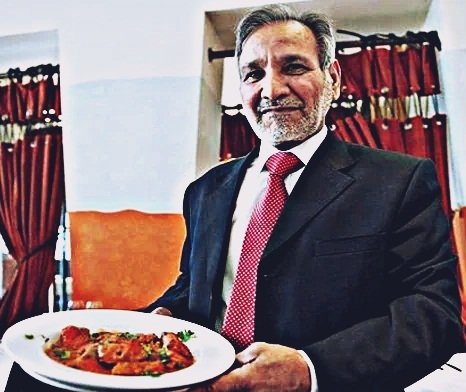 NEW DELHI, (IANS) – Twenty-one years after the UK’s then foreign secretary Robin Cook declared Chicken Tikka Masala, popularly known by its initials CTM, as “a true British national dish”, and a decade after a survey found that it was the second most popular dish in Britain close on the heels of Chinese stir-fries, its inventor, a Glaswegian of Pakistani origin, Ali Ahmed Aslam, has passed on.

Famous as just ‘Mr. Ali’, Aslam died aged 77 and is survived by five children — and the Shish Mahal in Glasgow’s West End, which he opened as a young boy in 1964. His funeral attended by family and friends was held at the Glasgow Central Mosque on December 22.

Aslam’s death was announced on Facebook by the restaurant in a post that read: “RIP MR ALI … Hey Shish Snobs … Mr. Ali passed away this morning … We are all absolutely devastated and heartbroken.” The usually dapper restaurateur is shown in the kitchen sporting a T-shirt that reads: ‘Eat Sleep Shish Repeat’.

In a widely quoted interview, Aslam was reported to have said that he created the dish in the 1970s in response to a customer’s complaint that his chicken tikka was too dry.

Aslam had said, according to ‘The Guardian’, quoting the interview: “We thought we’d better cook the chicken with some sauce. So, from here we cooked chicken tikka with a sauce that contains yogurt, cream and spices. It’s a dish prepared according to our customers’ tastes. Usually, they don’t take hot curry – that’s why we cook it with yogurt and cream.”

One unverified version of the story is that the restaurant simply dunked chicken tikka pieces in a base of canned tomato soup and fresh cream and created Chicken Tikka Masala.

Aslam’s version of the CTM story is challenged by Monish Gujral, grandson of Kundan Lal Gujral, one of three co-founders of Delhi’s iconic Moti Mahal restaurant. Gujral contends that CTM is not any different from the Murgh Makhni – Butter Chicken – that Moti Mahal is most famous for.

In 2009, according to ‘The Guardian’, Mohammad Sarwar, the then Labor MP for Glasgow Central who returned to Pakistan and joined Imran Khan’s Tehreek-i-Insaf party, had called for the city to be officially recognized as the home of the chicken tikka masala.

He campaigned for Glasgow to be given EU Protected Designation of Origin status for the curry and tabled a motion to that effect in the House of Commons. But the bid was unsuccessful, ‘The Guardian’ reports, “with a number of other establishments around the UK also claiming to have invented the popular dish”.

Sarwar went on to become a Pakistani Senator and served two terms as the Governor of the Punjab province. His son, Anas Sarwar, is the leader of the Scottish Labor Party and a Member of the Scottish Parliament.

CTM may not have got the EU stamp, but Robin Cook’s tribute to it still holds good: “Chicken tikka masala is a true British national dish, not only because it is the most popular, but because it is a perfect illustration of the way Britain absorbs and adapts external influences. Chicken tikka is an Indian dish. The masala sauce was added to satisfy the desire of British people to have their meat served in gravy.”