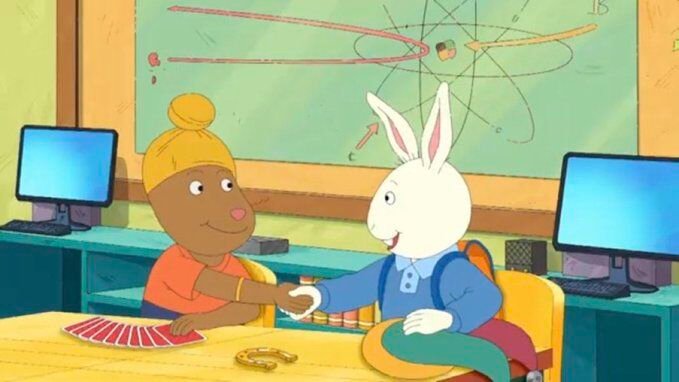 In a special episode of “Arthur,” the PBS Kids’ animated series, the bespectacled aardvark and his gang welcomed a new friend into their circle: a Sikh boy named Samir. (YouTube screenshot)

The episode, which was planned before the announcement came that the series was ending, chronicled Arthur’s first day in the fourth grade where he makes new friends, including Samir, a Sikh boy.

Even though Samir wears the Sikh articles of faith – a patka, a head covering, and a kara, a steel bangle – the episode did not bring Samir’s religious identity into the story.

“In this special, which deals with the uncertainties of the first day of school, we wanted to raise awareness about the challenges a kid might [face] when meeting new classmates, but we don’t make the specifics of the clothing, in this case the patka, the focus,” executive producer Carol Greenwald told CNN before the broadcast. “We did what we typically do – create a multidimensional character who Buster – and other kids – would be interested in hanging out with… We also hope that kids who do wear a patka or other cultural dress feel seen and represented on our show.”

“Arthur” is an animated series aimed at children ages four to eight, starring 8-year-old aardvark Arthur and his family and friends.

“Arthur’s” goals are to help foster an interest in reading and writing, to encourage positive social skills, and to model age-appropriate problem-solving strategies.

Based on the popular book series by Marc Brown, “Arthur” has been a family favorite to watch together for over 20 years.

“It’s lovely to see a Sikh character join Arthur in a new movie. Representation like this matters,” wrote one user.

“We are so excited to see @PBSKIDS adding a Sikh character to Arthur! Not only will this help Sikh kids feel represented, but it will also help normalize our articles of faith!” tweeted Sikh Campaign.

“..to be included like that is so important for people, especially kids!” wrote another

“This is so awesome! As long as they don’t give him an Indian accent, need to make the point that Sikhs aren’t only born in India,” opined yet another.

PBS is currently airing episodes from the show’s final season and new content is still in production.

“In the winter of 2022, the 25th and final season of ‘Arthur’ will debut. ‘Arthur’ will continue to be available on PBS Kids for years to come,” Greenwald told IGN. “Producer GBH and PBS Kids are continuing to work together on additional ‘Arthur’ content, sharing the lessons of ‘Arthur’ and his friends in new ways.”