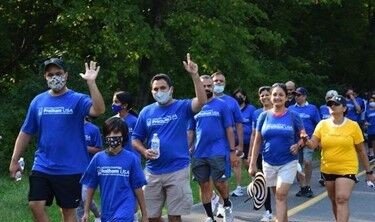 On the morning of Sept. 12, Pratham Chicago hosted its annual Chicago 5K Walk at Busse Woods, with over 150 registrations, which helped raise awareness and funds for Pratham’s education programs for underprivileged children in India.

The walk was also Pratham Chicago’s first in-person event in over a year, according to a press release.

Participants were greeted with a hot cup of tea as they came in and registered. They learned about Pratham while getting some exercise and socializing in the fresh air. Once across the finish line, supporters enjoyed a hot South Indian breakfast of upma, vadas, and kesari.

The second wave of the COVID-19 pandemic has had devastating effects on families and communities in India, noted the release, adding that school closures due to lockdowns are resulting in significant learning loss among children who have been out of school for 20+ months.

Participants came together at the walk to support the work that Pratham is doing to ensure that learning for children in India continues during the pandemic.

Srinivas Reddy, Indian American president of Pratham Chicago, said, “This year’s Pratham 5K walk was our first in-person event in nearly two years, and was very successful. It was wonderful to meet so many current and new Pratham supporters in the Chicago area. It is truly inspiring to see our community here support education for children and youth in underserved communities in India.”

Pratham Chicago plans to host the walk again in the summer of 2022.