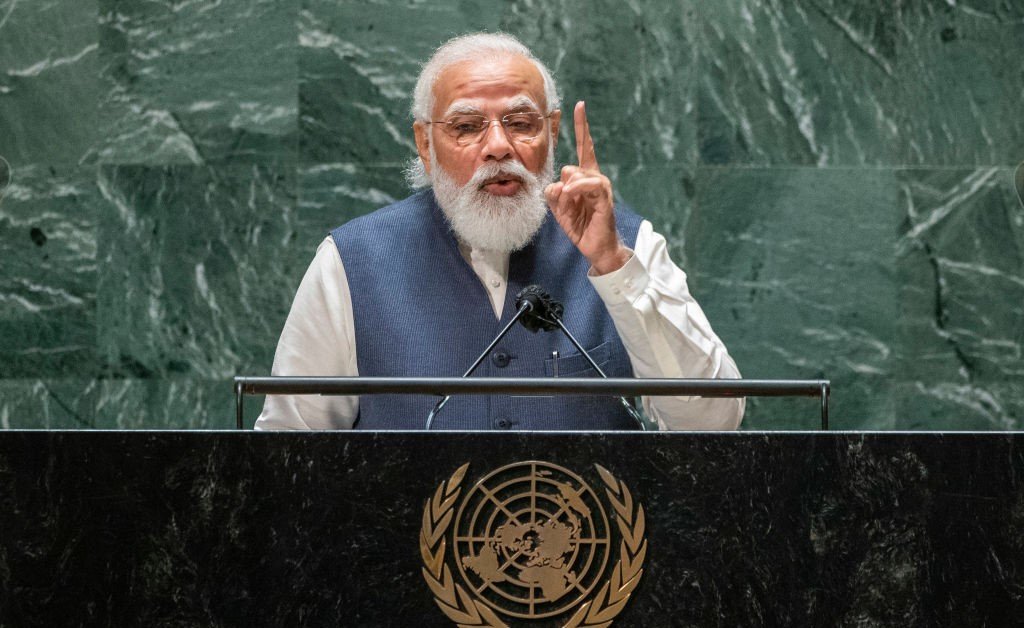 “When India grows, the world grows. When India reforms, the world transforms. The science- and technology-based innovations taking place in India can make a big contribution to the world. The scalability of our tech solutions, and their cost effectiveness are both unparalleled,” Modi said.

“Over 3.5 billion transactions are taking place every month in India through the unified payment interface,” he said.

Earlier, Modi began his speech on a deeply personal note, rewinding to his roots as a “poor boy” who sold tea in a small town and rose to the country’s highest political office.

“Democracy can deliver. Democracy has delivered,” he said in the first of the Sept. 25 addresses at the UNGA.

Among Modi’s opening lines: “I represent a country that is proud to be known as the mother of democracy.”

Modi came to New York fresh off the Quad summit on Sept. 24 when he also held a bilateral meeting with U.S. President Joe Biden.

The first in-person leader-level Quad meeting welcomed India’s announcement to resume exports of Covid vaccines, including to COVAX, beginning October 2021. The triage between Japan, Australia and India on this effort headlines immediate deliverables while offering a lens into what the Quad seeks to stand for.

This messaging comes soon after the U.S. withdrawal from Afghanistan and deepening mistrust between the U.S. and Pakistan, which remains important to U.S. intelligence because of its proximity to Taliban leaders now in charge of the war-torn nation.

About 15 minutes into his UNGA address, Modi shifted his attention to ripping Pakistan Prime Minister Imran Khan’s harsh rhetoric targeting India by slamming “countries with regressive thinking that are using terrorism as a political tool.”

Modi’s address came a day after Khan’s litany. During a Sept. 24 address, Khan had framed Pakistan as a victim “wrongfully trapped between American and global double standards.”

“For the current situation in Afghanistan, for some reason, Pakistan has been blamed for the turn of events by politicians in the U.S. and some politicians in Europe,” Khan said, adding: “From this platform, I want them all to know, the country that suffered the most, apart from Afghanistan, was Pakistan when we joined the U.S. war on terror after 9/11.”

“This is the country which is an arsonist disguising itself as a firefighter,” Sneha Dubey, a first secretary in India’s UN Mission, said.

“Pakistan nurtures terrorists in their backyard in the hope that they will only harm their neighbors. Our region, and in fact the entire world, has suffered because of their policies,” she said.

The morning after, on Sept. 25, Modi closed it out.

“These countries must understand that terrorism is an equally big threat to them. Also, it is absolutely essential to ensure that Afghanistan’s territory is not used to spread terrorism or for terrorist attacks,” Modi said in the tail end of his address, which kicked off the weekend programming at the UNGA.

“We also need to be alert and ensure that no country tries to take advantage of the delicate situation there, and use it as a tool for their own selfish interests. At this time, the women and children of Afghanistan, the minorities of Afghanistan, need help. And we must fulfil our duty by providing them with this help,” Modi said.

ANI adds from New York: Prime Minister Narendra Modi covered a wide range of issues in his speech at the United Nations General Assembly and called on the international community to work in unison to strengthen the rule-based world order.

“To strengthen the rule-based world order, the international community must speak in unison. The broad consensus reached during India’s presidency in the Security Council shows the world the way forward in the matter of maritime security,” he said.

Commenting on the situation in Afghanistan after the Taliban seized power last month, the prime minister said it is absolutely essential to ensure that Afghanistan territory is not used to spread terrorism and for terror activities.

Modi highlighted the flagship schemes of his government including Ayushmann Bharat, PM Awas Yojana and PM Jan Dhan Yojana and emphasized the principle of ‘Antyodaya’.

Stressing that the country’s “faith is to serve people,” Modi invited the global manufacturers of vaccines to come and make vaccines in India.

He also informed that India has developed the first DNA-based COVID vaccine, which can be given to people older than 12 years.

Modi pointed out that despite having limited resources, “India is working aggressively towards vaccine development and manufacturing.”

Noting that COVID-19 taught the world that the global economy should be more diversified now, Modi said the expansion of the global value chain is important in this regard.

The prime minister said that science and technology-based innovations in India can greatly help the world and the scale and cost of the country’s technology solutions is unmatched.

During his U.S. visit, Modi held bilateral meetings with Biden and Vice President Kamala Harris in Washington. He also participated in the first in-person Quad Summit. Apart from this, he also held meetings with five global CEOs for potential investments in India.

AP adds from New York: Modi also highlighted what he called the need to protect oceans from “the race for expansion and exclusion.” India and China have long competed for influence in the Indian Ocean.