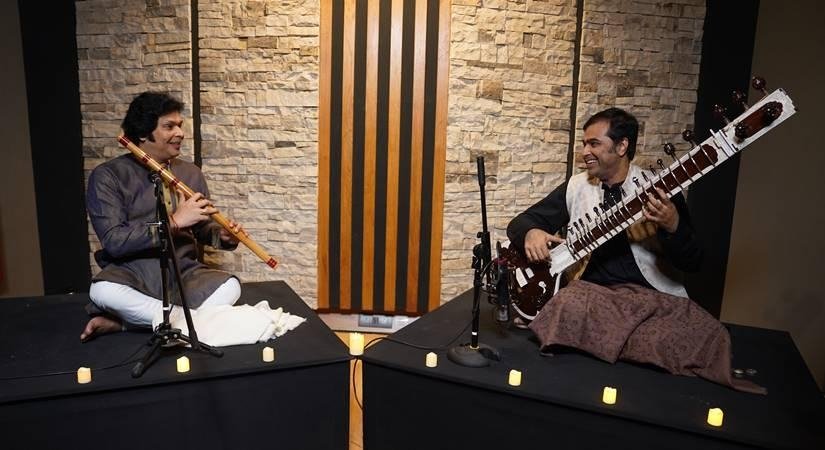 The seven-track album is available across streaming platforms.

‘Saath Saath,’ which was recorded in Mumbai earlier this year, includes seven ragas for morning and night. The record, co-written with flautist Rakesh Chaurasia, nephew of legendary flautist Hariprasad Chaurasia, draws inspiration from the original spirit of the raga tradition and provides a beautiful aural experience.

Purbayan and Rakesh performed on August 14 at New York’s Carnegie Hall, accompanied by Ojas Adhiya on tabla and Taufiq Qureshi on percussion, ahead of the album’s release.

While the album adheres most closely to the spirit and traditions of the ragas in style and sound, it is also an evolution from Purbayan’s progressive approach to Indian classical music, which began in earnest after a moment of epiphany during one of his many trips to California during the 1990s, when he’d make the musical pilgrimage and immerse himself at the Ali Akbar College of Music, founded by the great sarod master, Ustad Ali Akbar.

During these visits, when he had some downtime, he first heard the sounds and far-out jazz of Ornette Coleman and wondered, “Is it okay to enjoy this so much?” “After much internal debate, he realized that in order to deeply immerse oneself in tradition, one requires outside influence, and that conclusion has been forever enshrined in his work.”

‘Saath Saath’ was recorded in one or two takes, and the album’s progression follows the passage of day and night, with the first half of the album dedicated to more soothing ragas about mornings – such as ‘Lalit,’ which captures the essence of a meditative morning – and languorous afternoons – such as ‘Madhuvanti.’ The second half of the album, ‘Yaman Madhya Laya’ and ‘Yaman Drut,’ explore the romance and emotions of dusk and night.

Purbayan and Rakesh have known each other for over two decades and have taken similar musical paths, experimenting outside of the classical tradition. ‘Saath Saath,’ which literally means ‘doing something together,’ brings Purbayan and Rakesh’s chemistry and friendship to the forefront, and shows the intimate dynamism between the pair, two uniting souls, through their instruments, the sitar, and the flute. (IANS)