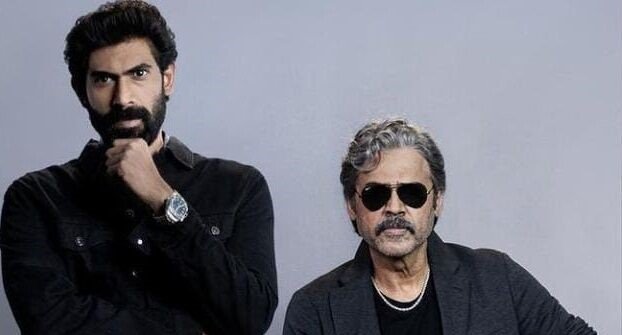 Rana Daggubati and his uncle Venkatesh star in ‘Rana Naidu.’ (photo via IANS)

MUMBAI — Actor Rana Daggubati will be seen with his star uncle Venkatesh on onscreen for the first time in the Hindi adaptation of American show ‘Ray Donovan.’ The series has been titled as ‘Rana Naidu.’

The action drama will follow the life of Rana Naidu, the go-to guy for everyone in Bollywood when they have a problem. Karan Anshuman is the show-runner and the director and joining him to co-direct is Suparn Verma.

Speaking about the series, Rana Daggubati says: “It’s lots of special firsts for me. Working with my uncle Venkatesh and the first with Netflix in long form storytelling that’s completely different from what both of us have ever done in our careers. I’m extremely happy to be with a crew and a platform that knows this the best. It will be challenging and new and definitely is going to be fun. Looking forward to filming soon.”

“I cannot wait to work with Rana (Daggubati), we are going to have a blast on-set and this show is the perfect project for us to work on. I am a huge fan of Ray Donovan myself and the entire team is pulling in all the stops to ensure we do justice to it,” added Venkatesh.

The show will stream on Netflix and the the format rights are licensed by Viacom CBS Global Distribution Group.

Monika Shergill, VP, Content, Netflix India said, “We are excited to bring the powerhouse performers and stars Rana Daggubatti and Venkatesh Daggubatti to Netflix for their first ever pairing together. The series, Rana Naidu, will be a thrilling Indian adaptation of a record breaking international show and will take the audience on a breathless ride with the dynamic duo.”