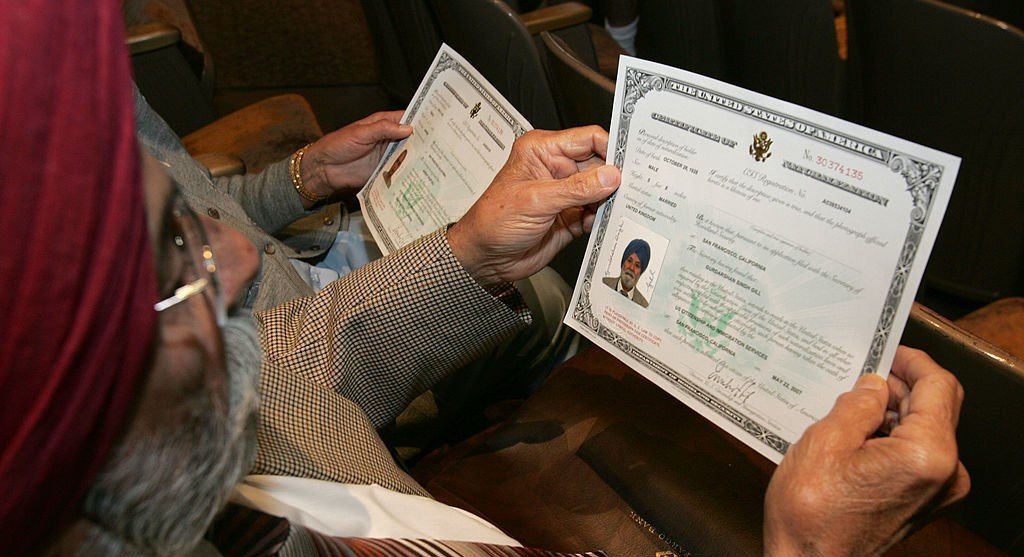 Gurdarshan Gill of India holds his U.S. citizenship certificate during a naturalization ceremony May 22, 2007 in San Francisco, California. Senate Parliamentarian Elizabeth MacDonough Sept. 19 evening dealt a crushing blow to millions of immigrants seeking permanent residence status as she ruled that a landmark immigration proposal could not be included in the $3.5 trillion budget reconciliation bill. “Failure to provide a path to lawful permanent residence for the 1.2 million people in the employment-based green card backlog would be tantamount to staging an economic recovery with one hand tied behind our back,” said Indian American Rep. Raja Krishnamoorthi. (Justin Sullivan/Getty Images)

Senate Parliamentarian Elizabeth MacDonough Sept. 19 evening dealt a crushing blow to millions of immigrants seeking permanent residence status as she ruled that a landmark immigration proposal could not be included in the $3.5 trillion budget reconciliation bill.

In her decision, MacDonough noted that eight million people would immediately become qualified to become legal permanent residents, increasing the deficit by $140 billion over 10 years as a result of the social safety net benefits programs to which they would be entitled, including Medicare, Medicaid, SNAP — the federal food stamp program — and CHIP, which provides health insurance to low income children.

She noted that the vast majority (nearly 7 million by CBO’s estimate) of people who would gain LPR status are currently unlawfully present and generally ineligible for adjustment of status under current law.

“The policy changes of this proposal far outweigh the budgetary impact scored to it and it is not appropriate for inclusion in reconciliation,” stated MacDonough, who earlier in the year had blocked a move to raise the minimum wage to $15 per hour.

The immigration portion of the budget reconciliation bill — passed by the House Judiciary Committee Sept. 13 — proposed a $5,000 sub-fee allowing Indian American workers stuck in a decades-long green card backlog to jump the queue and immediately receive the coveted document. More than 1.2 million Indian Americans on H-1B visas, and their H-4 dependent spouses and children, are stuck in the green card backlog, waiting an average of more than 80 years before becoming permanent residents. The backlog was created by a provision that allows only 7 percent of the 140,000 employment-based green cards to be allotted to natives of a single country each year. Fewer than 9,000 employment-based green cards are annually allotted to Indian Americans.

“This is a once in a generation opportunity,” immigration attorney Cyrus Mehta told India-West Sept. 15. “It would give people an opportunity to immediately move out of the backlog.”

The provision would not remove the per-country caps, but would instead have flushed an estimated $6 billion into the U.S. economy.

The bill also makes provisions for legalizing recipients of the Deferred Action for Children Arrivals program.

Critically, the measure reallocates family- and employment green cards that are unused each year due to the per-country caps. (see: https://bit.ly/3Eu4hEi)

Immigration advocates and members of the House and Senate expressed their disappointment in regards to MacDonough’s decision. Senate Majority Leader Chuck Schumer, D-New York, said: “Last night’s ruling was extremely disappointing. It saddened me and it angered me.”

“But make no mistake: the fight continues,” said Schumer, noting that Democrats are preparing alternate proposals and will meet with MacDonough in the coming weeks.

“The last one and a half years have shown us how vital immigrants are to our economy. So many risked their lives on the frontlines of the pandemic, but are unable to get the safety net we all enjoy,” he said.

“We are short on workers. We need them in our labor force,” added Schumer, estimating that in New York, one-third of the health care workers who worked during the pandemic were immigrants.

Sen. Bob Menendez, D-New Jersey, echoed Schumer’s comments in a press call Sept. 20 morning. “We were all hugely disappointed on the decision the Parliamentarian gave last night, but for me at least, this really does not mean this process is over.”

“(MacDonough) gave her view on only one approach on including a pathway to citizenship in reconciliation. This is not the end. We are not going to take ‘no’ for an answer. We are committed to fighting for inclusive and humane immigration reform.”

Rep. Ilhan Omar, D-Minnesota, who is herself an immigrant, asked the White House and the Senate to simply ignore MacDonough’s decision.

“This ruling by the parliamentarian is only a recommendation. Senator Schumer and the White House can and should ignore it,” Omar tweeted. “We can’t miss this once in a lifetime opportunity to do the right thing.”

“Failure to provide a path to lawful permanent residence for the 1.2 million people in the employment-based green card backlog, most of whom are H-1B visa holders, would be tantamount to staging an economic recovery with one hand tied behind our back,” wrote Krishnamoorthi and members of Congress in a letter sent to House Speaker Nancy Pelosi and Schumer.