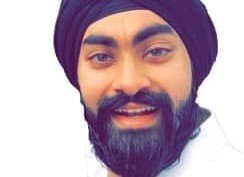 Tejas Konduru is co-founder of Via. (LinkedIn photo)

Several Indian Americans are featured in the recently-released Forbes’ ‘30 Under 30’ list for 2022, according to a Forbes report Dec. 1.

It’s the 10th anniversary of the Forbes Under 30 class, which is set to define the next decade — and beyond, it noted.

A decade ago, Forbes launched the list with one clear goal, the report said: “To identify the new guard, the young innovators, trailblazers and disruptors remaking our world….Much of 2022 was being freshly created by this group back in 2012. Ten years from today, it’s a good bet we’ll all be living in a new world being imagined today by the 600 entrepreneurs, innovators and entertainers that make up our 10th Anniversary class.”

All the honorees in the Forbes Under 30 Class of 2022 have defied the odds, it noted, “navigating a global pandemic, supply chain crunches and isolation to build ventures that are resilient and destined to change the world.”

In the category of Retail & Ecommerce, Indian American Tejas Konduru found a place on the Forbes 30 under 30 list for 2022. Co-founder of Via, Konduru is the son of Silicon Valley engineers. He started Via to help retailers engage with customers on the device they carry around all day: Their mobile phone, said Forbes. Via puts together campaigns on mobile-native channels like apps, text and direct messages on Facebook and Instagram.

He has raised $75 million from Tiger Global and others, and projects revenue will quadruple to $10 million in 2021.

Raunak Nirmal, co-founder of Acquco, is also featured in this category on the list. Acquco is one of the largest and fastest-growing aggregators of companies that sell on Amazon, according to Forbes.

Nirmal has raised $160 million to acquire businesses that will generate some $250 million in revenue this year. “I’ve been living and breathing Amazon,” says Nirmal, who worked as an analyst at Amazon straight out of college and started several Amazon companies himself. Now he’s scaling others’ products (household items like shower curtains, bug zappers and milk frothers), a process that includes expanding beyond Amazon to sites such as Walmart, Target and Best Buy.

“We think the potential isn’t just getting a bunch of brands on Amazon. We think the true potential is turning these brands into true omnichannel brands,” adds Nirmal, who emigrated from India when he was seven years old.

Other entrepreneurs in the Retail & Ecommerce category are:

*Vinay Menda and Issam Freiha, co-founders of Blank Street, who, as lovers of coffee, are reimagining the coffee cart, offering fast and affordable coffee that doesn’t sacrifice on taste, as well as eats from local vendors, said Forbes.

Blank Street has 15 locations in New York City, with plans to expand to 100 locations in other cities in 2022. It has raised $32 million from General Catalyst and Tiger Global.

*Aadil Kazmi, co-founder of Swyft, which he started to offer fast shipping to businesses not on Amazon. Swyft utilizes an asset-free model: No trucks, drivers or warehouses. Instead, it taps mom-and-pop courier companies with idle trucks, giving them more volume and efficient routing technology to increase their capacity by up to 30%, Forbes noted. Swyft has raised $20 million from Forerunner Ventures, Shopify and Inovia, and projects revenue of $7 million in 2021.

In the category of Music, Trevor Sookraj found a place on the list. Founder of Divisional, he is hoping that his “marketer-first” agency can provide startups a full growth team of Divisional employees at a fraction of the traditional cost. Their outsourcing model has been lucrative, with revenue growing 240% this year to $1.5 million.

(Articles on Indian Americans featured in other categories on this latest Forbes list will be posted later.)