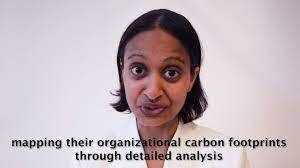 Tara Gupta is founder and CEO of Map-Collective, who made the Forbes list in the category of Energy. (Facebook/Map-Collective photo)

In the final categories of Forbes ‘30 Under 30’ anniversary list for 2022, released this month, several more Indian Americans were featured in the categories of Energy, Food & Drink, and Finance.

They are as follows:

*Sid Bhattacharya, worldwide head of Products & Solutions at Amazon. Bhattacharya founded and leads the products and services business of the Amazon Web Services division that caters to the energy industry –helping the operators of oil & gas operations, chemical plants, renewable energy projects and even nuclear plant operators, according to Forbes.

*Tara Gupta is founder and CEO of Map-Collective, a green-tech startup which digitally tracks and maps environmental data and users’ carbon footprints, according to Forbes. She is also the founder of Anamakos, a sustainable real estate development startup.

*Sakshi Mishra is a staff researcher at National Renewable Energy Laboratory. Her research is focused on harnessing AI for solving clean energy integration challenges, and her work led to the deployment of a neural net-based tool for accurately predicting the energy consumption of buildings, noted Forbes.

*Ameet Kallarackal and Nick Loeper, cofounders of Fisherman, both had small food service jobs in their youth. In 2018, they founded Fisherman, which builds a complete restaurant website in two minutes using just a business’s name, according to Forbes.

*Ambika Acharya, cofounded Weav, a fintech startup that aggregates sales data for small businesses and makes it accessible through an API, letting lenders see it in seconds to assess borrower risk, noted Forbes.

*Sahana Athreya, as a data scientist at Millennium Management, researches alternative datasets to provide investment insights. Her statistical and machine learning models have been crucial to a broad set of investment teams, said Forbes.

*Rahul Raina, cofounder of TRM Labs, which provides forensic analysis for the IRS and dozens of others. By charging for licenses that let customers identify where an asset came from, who owns it and score the risk of that owner, the firm has grown 700% since last year, noted Forbes.