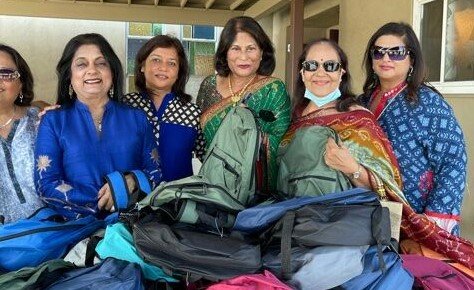 Volunteers helped organize an Indian American community service event Aug. 8 to provide back to school backpacks to kids in need in Bellflower, Calif., organized by the Shriji Mandir and the H4H Team. (photo provided)

BELLFLOWER, Calif. – The Shriji Mandir organized a community service event to provide back to school backpacks and school supplies for underserved kids/students of the city of Bellflower on Aug. 8, 2021. The organizers of the event, Shriji Mandir and the H4H Team (Hope, Help & Healing for Humanity), were excited to see the smiles on the faces of more than 200 children when they received their new backpacks and school supplies.

Most of the children, according to a press release, were from low income communities and unable to meet their basic needs. The aim of the event was to help the children achieve their education goals and encourage them to stay in school.

A special thanks was given to Mona and Gautam Shah and Karina’s Backpack Project and to the Joy of Sharing Foundation for their fiscal sponsorship. Special thanks were also given to Mona Shah for sponsoring the backpacks filled with school supplies, said the release.

Thousands of hours and dollars went in to make the event happen. Rekha Bajaria, vice president of Shriji Mandir, and the H4H Team worked tirelessly and coordinated the event with Victor Sanchez, councilman of Bellflower City Community that services underprivileged children. Bhargav Patel, president of the Shriji Mandir, and Bajaria thanked all the volunteers and the H4H team in making this a successful event, noted the release.

The H4H team volunteers were appreciated for driving, dropping off, collecting, counting, and organizing to fill the backpacks, as well as special thanks to Tunisha Tandon, who organized the event.