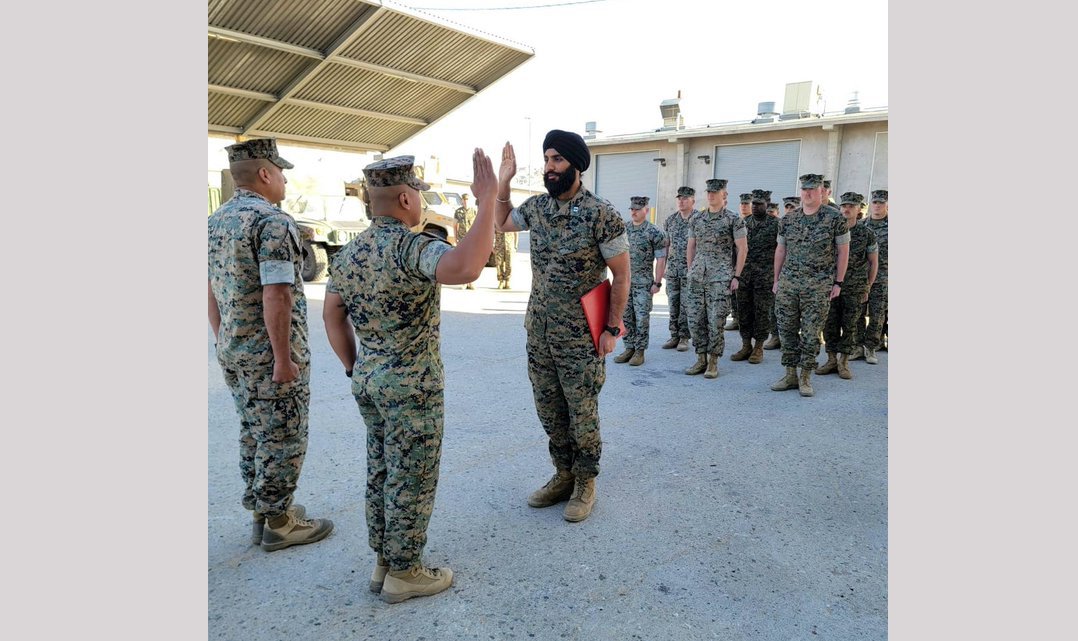 Captain Sukhbir Singh Toor has gone to court along with three other Sikh recruits for religious freedom even while they serve in the US Marine Corp. (Photo Twitter @sikh_coalition)

WASHINGTON, DC – On April 12, Sikh Marines filed a lawsuit against the Corps saying they were being forced to choose between staying in the service or following their faith.

The Sikh Coalition in a press release said, it was joined by pro bono co-counsel at Winston & Strawn LLP, Becket Fund for Religious Liberty, and BakerHostetler, along with the support of Sikh American Veterans Alliance in filing the lawsuit.

“Despite more than a year of efforts to engage in good faith, the USMC continues to sideline our clients due to their articles of faith,” Giselle Klapper, Sikh Coalition senior staff attorney, said in the press release. “Treating a Sikh’s beard, a core tenet of the faith, as merely optional is unacceptable.”

Chahal and J. Singh intend to join the USMC as enlisted Marines, and A. Singh intends to join the Marine Corps Reserve. According to the press release, each of them applied for a religious accommodation last year, and so far, the accommodations don’t go far enough. They are still barred from maintaining their beard and unshorn hair on deployments where they would receive Hostile Fire or Imminent Danger pay, even though deployment to the front lines is essential to service in the USMC. In addition, all three have been told that they must forsake their articles of faith for the duration of their time at boot camp, the Sikh Coalition said.

The three men issued the following joint statement: “We remain ready to meet the high mental and physical standards of the Marine Corps because we want to serve our country alongside the best. We cannot, however, give up our right to our religious faith while doing so–not least of all because that is one of the core American values that we will fight to protect at all costs as proud U.S. Marines.”

Capt Toor was granted a historic, “but incomplete and inadequate,” accommodation by the USMC in June of 2021 after first applying for an accommodation in March of that year, the Sikh Coalition said. It argues that like the pre-accession recruits, Toor’s accommodation prohibits him from maintaining his beard when he is serving in a significant portion of the world, for a person of Toor’s experience.

“The alleged safety concerns that the USMC is using to justify this restriction have long since been mitigated by other branches of the U.S. Armed Forces and militaries around the world,” it adds.

“I have proven my commitment to the Corps through my four years of service, and I’m ready to deploy just like any other service member,” said Capt Toor. “I can’t do that, however, as long as I’m left on the bench because of my religious beliefs. I’m prepared to fight for the right to do my job while staying true to my faith with no caveats, asterisks, or discriminatory restrictions.”

“When I fought for one of the first religious accommodations for a Sikh Soldier in a generation, I explained that I would gladly sacrifice my life–but not my faith–for my country,” said Dr. Kamal Singh Kalsi, the founder of SAVA and a Lieutenant Colonel in the U.S. Army Reserve, who served in Afghanistan with his turban and beard. “This is the same offer that these men are willing to make now. At a time when our Armed Forces need to leverage all available talent to confront a wide range of modern threats, the USMC should bring its policies in line with the U.S. Army and Air Force to let them serve.”