HomeEntertainmentCinemaSooraj Barjatya to Reunite With Salman Khan For His Next Film

Sooraj Barjatya to Reunite With Salman Khan For His Next Film 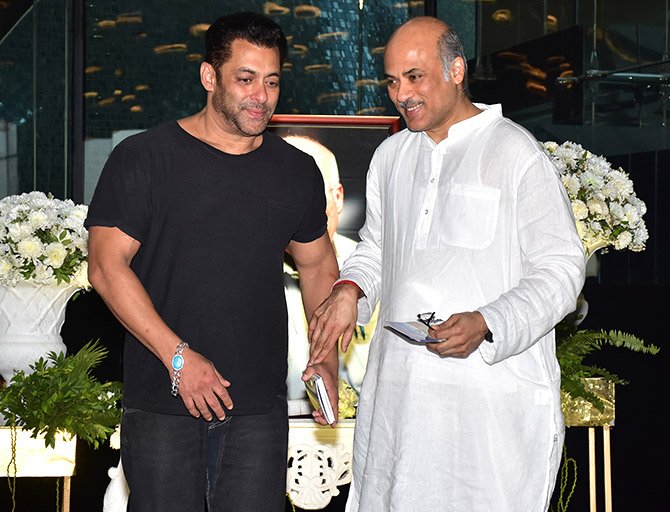 Sooraj Barjatya to Reunite With Salman Khan For His Next Film

MUMBAI (ANI) – Bollywood filmmaker Sooraj Barjatya has said that he will be collaborating with actor Salman Khan again.

In an interview on November 3, Sooraj said, “Definitely I want to make another film with Salman Khan, and we are currently working on the story, but right now I am busy with ‘Uunchai’ and my younger son Avnish’s debut directorial film which marks the acting debut of Sunny Deol’s son Rajveer Deol and Poonam Dhillon’s daughter Paloma Dhillon. Currently, these two films are my responsibilities, after that, I will work on the script of my next film with Salman Khan.” Bollywood actor Salman Khan made his big Bollywood debut as the lead in Sooraj Barjatya’s film ‘Maine Pyar Kiya’ in the year 1989 alongside Bhagyashree.

Post the success of ‘Maine Pyar Kiya’, Salman and Sooraj collaborated on films like ‘Hum Apke Hain Kaun’, ‘Hum Saath Saath Hain’ and ‘Prem Ratan Dhan Payo’ and all of them were declared blockbuster hits.

Sooraj is currently busy promoting his upcoming family entertainer film ‘Uunchai’ which stars Amitabh Bachchan, Boman Irani, Anupam Kher, Neena Gupta and Parineeti Chopra in the lead roles and is all set to hit the theatres on November 11, 2022.

Meanwhile, Salman will be next seen in an upcoming action entertainer film ‘Kisi Ka Bhai Kisi Ki Jaan’ which is slated to release on Eid 2023 and in Yash Raj Film’s next action thriller film ‘Tiger 3’ along with Katrina Kaif, which is slated to hit the theatres on the occasion of Diwali 2023.