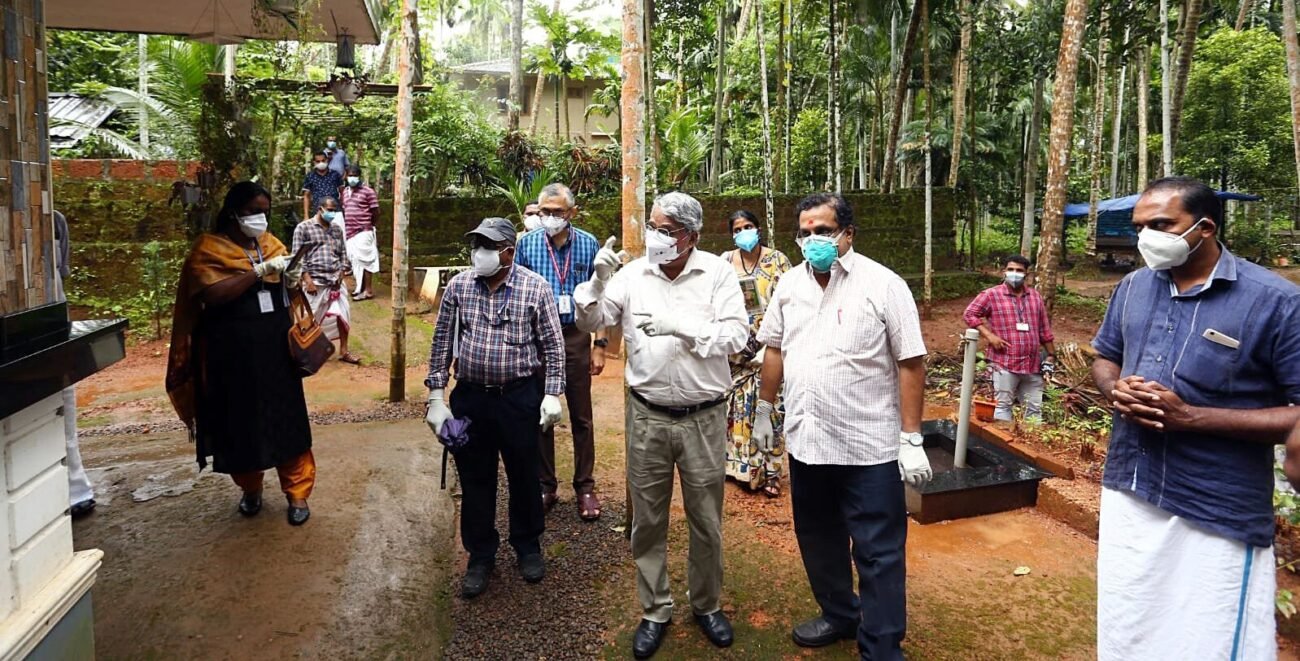 A central team of experts visits the homes in Chathamangalam, Kerala, where one Nipah victim died, in Kozhikode Sept. 6. (ANI photo)

NEW DELHI — The southern Indian state of Kerala is quickly ramping up efforts to stop a potential outbreak of the deadly Nipah virus, even as the state continues to battle the highest number of coronavirus cases in the country.

Kerala is on high alert after a 12-year-old boy died of the rare virus Sept. 5, spurring health officials to start contact-tracing and isolating hundreds of people who came into contact with the boy, who died at a hospital in the coastal city of Kozhikode.

On Sept. 7, the state health minister told reporters that the samples of eight primary contacts have come back negative.

Nipah, which was first identified during a late 1990s outbreak in Malaysia, can be spread by fruit bats, pigs and through human-to-human contact. There is no vaccine for the virus, which can cause raging fevers, convulsions and vomiting. The only treatment is supportive care to control complications and keep patients comfortable.

The virus has an estimated fatality rate of between 40% and 75%, according to the WHO, making it far more deadly than the coronavirus.

George said that more samples will be tested and that a total of 48 contacts, including the eight that have tested negative, are being monitored at a hospital. Officials will also be carrying out door-to-door surveillance and identifying secondary contacts.

Over the weekend, the federal government sent a team of experts to Kozhikode to help local officials trace contacts. They also suggested a list of recommendations, including bolstering health infrastructure in case of more cases and alerting neighboring districts.

The state dealt with Nipah in 2018, when more than a dozen people died from the virus. This time around, the concern is compounded by the fact that the state has grabbed national headlines in recent weeks for seeing the highest number of daily COVID-19 cases across India.

On Sept. 6, Kerala registered nearly 20,000 COVID-19 infections out of India’s daily total of 31,222. While cases across the country have declined after a devastating surge earlier this year, the situation in Kerala remains concerning, with experts warning that the state cannot let its guard down.