HomeArts/BooksSurat to San Francisco: How the Patels Started the Hotel Business

Surat to San Francisco: How the Patels Started the Hotel Business 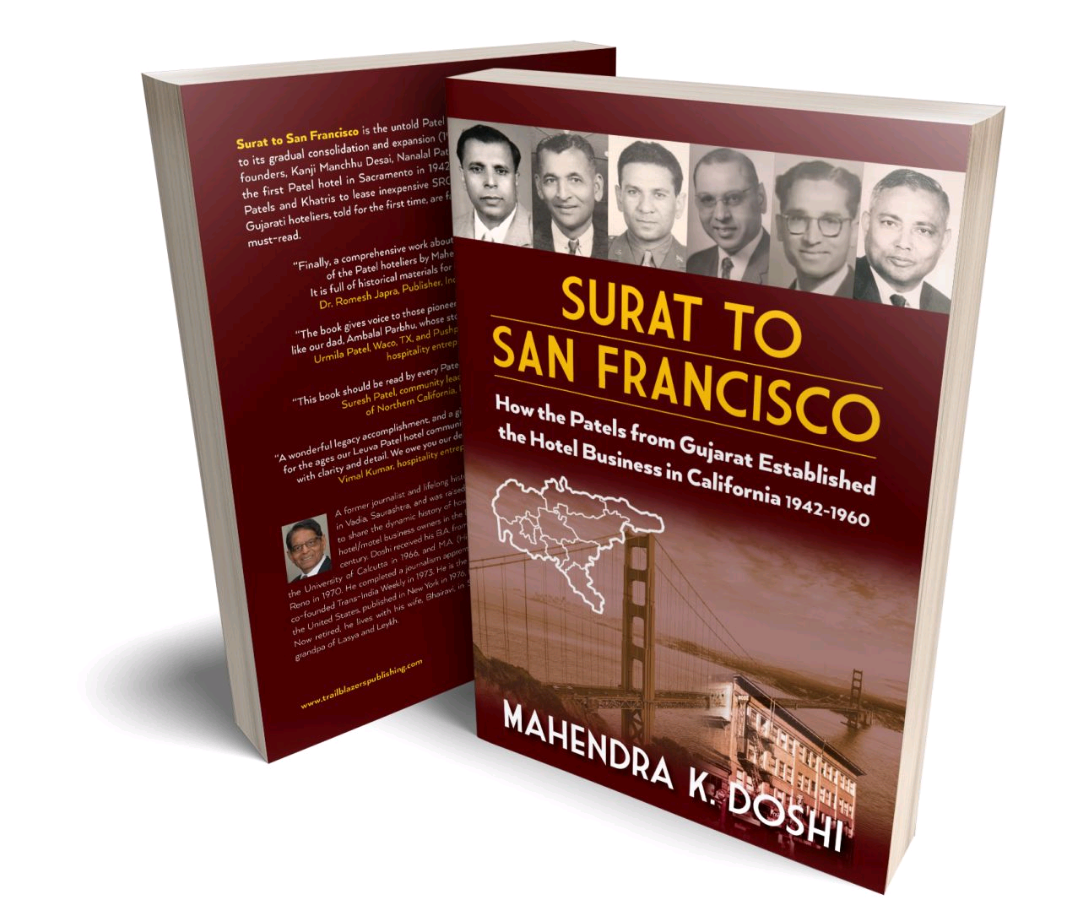 Surat to San Francisco: How the Patels Started the Hotel Business

One of the major American economic engines, the American hospitality industry, generates $1.2 trillion in business sales, 3 million jobs, $395 billion in wages, and $659 billion in GDP. The Gujarati Patels, who have a dominant presence in the lodging landscape, contribute substantially to the above economic values.

The recently published book by Mahendra K. Doshi, ‘Surat to San Francisco: How the Patels from Gujarat Established the Hotel Business in California 1942-1960,’ [Hardcover, 338 pages, $39.95 by Trailblazers Publishing (www.patelhotelhistory.com), San Jose, Ca.], makes an excellent historical analysis as to how the Patels from Gujarat founded the Patel hotel business in 1942 and then spread and consolidated it by introducing over 30 Patels in San Francisco’s Mission District by leasing inexpensive single room occupancy (“SRO”) hotels.

To my knowledge, this is the first book that traces the Patel hotel history. Doshi should be admired for relying on the oral narrations of about 160 people. The book quotes a Patel trailblazer’s daughters, Pushpa and Urmila Patel, “The book gives voice to those pioneers who are no longer with us, like our dad, Ambalal Parbhu, whose stories will inspire our children.”

Doshi traces the Patel motel business genesis starting with three Patel founders, all illegal farmhands, who took over a small, dilapidated SRO from a Japanese lady, who was forced to report to the internment camp during World War II. The Ford Hotel on 6th Street became the first Patel-operated hotel in America. Sacramento became the birthplace of a serendipitous phenomenon for the Patel lodging enterprise, the likes of which have not been seen since. The accidental hotelier, Kanji Manchhu Desai, saw in it a path to settle his countrymen.

By the year 1955, Desai shifted to England, but the Patel hotel expansion continued, led by Surati Patels, Bhula Vanmali Patel, Dahya Ratanji Patel, Dhanji Vakil Patel, and 6 Khatris who came under the Luce-Celler Act that should be considered the watershed moment of the Patels’ hospitality history as they kept expanding the hotel business, eventually buying, instead of leasing. By 1960, Patels had shifted to motel operations not only in the Bay Area but all over the US. There was a mad rush to get into the business with the arrival of new Patels under the Walter McCarran Act and the upheaval caused by Idi Amin in Africa that forced many to seek a livelihood in America.

Today, the Patels are a dominant force in the business, their voice in it unparalleled, their presence ubiquitous, and their revenue in billions, thanks to the 3 farmhands who changed the trajectory of how Patels would make a living in America.

Doshi’s book is a must-read for not only those in the hospitality business but also for those who are following our diasporic history. He not only has 150 + images of the hoteliers and their wives but a few interesting anecdotes of early Gujaratis and Patels.

Very few know that Haridas Thakordas Muzumdar, whom many Bengalis considered their own, was a Gujarati from Mahuva and an ardent Gandhian, and the first Republican Indian to run for a Congressional seat in Iowa in 1956. A Gujarati firebrand was creating chaos for the Canadian Govt. in Vancouver in 1911-1917. He was Chhagan Kheraj Verma from Porbandar.

(Parameswaran is a Columbia University graduate. He lives in Scarsdale, NY.)