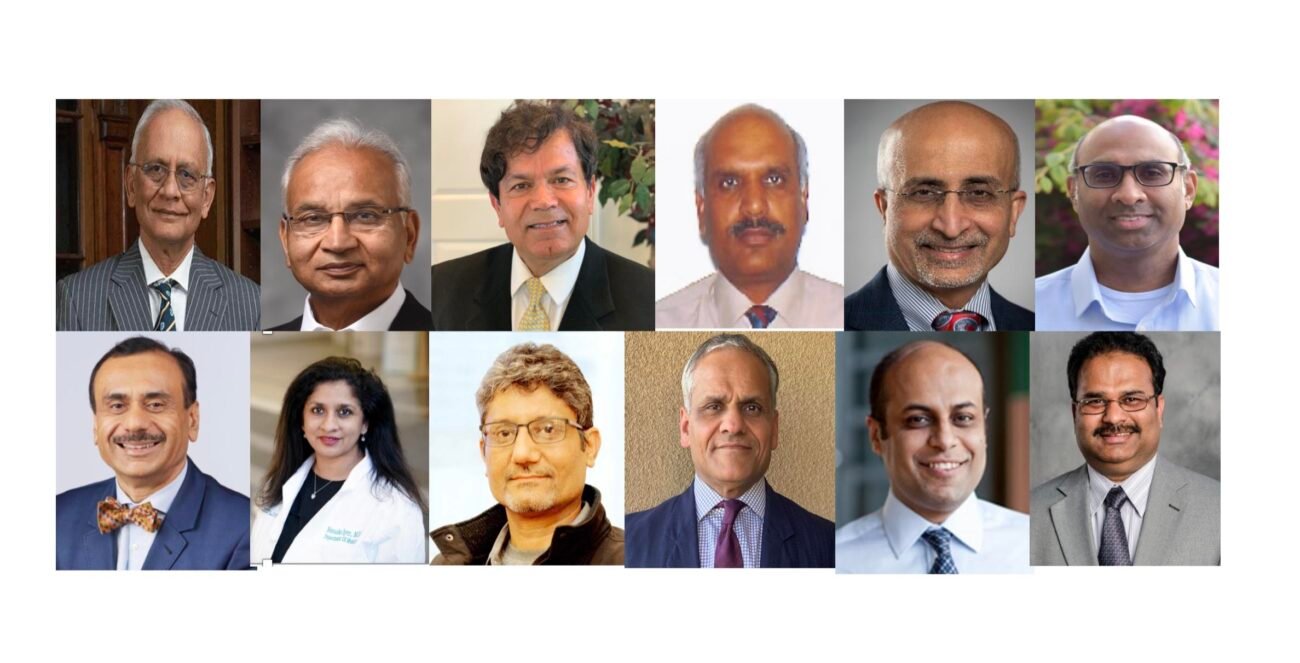 NEW ORLEANS, LA – Ten Indian American scientists were honored for their outstanding contributions in cancer research by the Society of American Asian Scientists in Cancer Research (SAASCR) on April 10. SAASCR is a non-profit with more than 5000 members. All itsmembers are also members of American Association for Cancer Research. Dr. Rajvir Dahiya, President of SAASCR, presented the awards during the organization’s annual meeting held here, April 8-13. Dr. Dharam Paul Chauhan, secretary of SAASCR was also present.

Those who received the awards were:

Menon is a pioneering cancer surgeon whose body of work has helped to lay the foundation for modern robotic surgery. He serves as Professor and Chief of Strategy and Innovation in the Department of Urology, for the Mount Sinai Health System. He is also the Director of Education and Director of the Precision Prostatectomy Program in the Department of Urology at Icahn Mount Sinai and Center of Excellence for Prostate Cancer at The Tisch Cancer Institute. Having performed over 6,000 robotic prostatectomy surgeries, he is considered one of the foremost surgical innovators in the world. He has been a visiting professor at more than 50 institutions across the globe and his team has been involved in the establishment of more than 35 robotic surgery programs globally. He has published widely and in 2017, an exhibit titled Many Voices, One Nation at the Smithsonian National Museum of American History incorporates some of his personal effects. He graduated from JIPMER in Pondicherry and completed his residency in Urology at The Johns Hopkins Hospital.

He is the CEO of the “Vattikuti” Foundation. This is a non-profit organization that enables application of cutting-edge technologies to improve patient outcomes and in sourcing robotic technology developed in United States and then disseminating it across the globe, with special preference given to institutions and surgeons in India. He is also responsible for the assiduous mapping and coordination of research and neoteric techniques for further advancements in robotic surgery. For his efforts to bring robotic surgical programs to India, he has been one of the two medical professionals to be recognized at the Smithsonian Museum of American History in Washington DC under the “Many Voices One Nation” section, recognizing 500 years of the history of immigrants in India. He is recognized as a medical educator, innovator, kidney transplant surgeon and healthcare administrator. He received his MBBS from SMS Medical College, Jaipur, and his M. Ch in Urology is from CMC Vellore, Executive MBA from the University of Michigan, and a graduate degree in Biostatistics from the Harvard Extension School. He received the Padma Shri in 2000 from the Government of India.

He completed his residency, MBA, and American Foundation for Urologic Disease Research Scholar fellowship at the University of Pittsburgh. He completed his urologic oncology fellowship at Memorial Sloan Kettering Cancer Center. He is currently serving as the President, Allina Health Cancer Institute, Minneapolis, and Chief System Research Officer for Allina Health. He is a professor in the department of Urology at Rush Medical College and an Adjunct Professor of Urology at the University of Minnesota, where he held multiple leadership positions. An accomplished clinician, researcher, and scholar, he has authored or co-authored over 300 peer reviewed publications. He is a principal or co-investigator on grants funded through the Department of Defense, National Institutes of Health, American Geriatrics Society, and Center for Disease Control. His research work has focused on both basic science and outcomes/health services research. He has worked on developing new strategies for gene therapy using Ad5PSA and Ad5Trail for advanced prostate cancer with studies being translated from the lab to phase I clinical trials. He has also been involved in preclinical studies of novel chemotherapeutic agents for the prevention as well as inhibition of prostate cancer growth. He has also been involved in developing new markers for bladder cancer. He has been the co-lead and co-founder of CHAAMPS which is a national center conducting research on African American Men’s Health. He is also a collaborative investigator on RESTORE, a series of NIH funded studies on prostate cancer in sexual minority men.

He is the RZ Cao Professor of Medicine, Chief of the Division of Hematology, and Member of the Institute for Stem Cell Biology and Regenerative Medicine at the Stanford University School of Medicine. He was an undergraduate at Harvard, earned his MD and PhD from UCSF, and trained in Internal Medicine at Brigham and Women’s Hospital in Boston. While at Stanford, he completed post-doctoral training in the laboratory of Irving Weissman, where he investigated acute myeloid leukemia (AML) stem cells and therapeutic targeting with anti-CD47 antibodies. With Dr. Weissman, he developed a humanized anti-CD47 antibody, initiated first-in-human clinical trials, and in 2015, co-founded a biotech start-up Forty Seven Inc. He directs an active NIH-funded laboratory that focuses on the molecular characterization and therapeutic targeting of leukemia stem cells in human hematologic disorders, particularly AML, and has over100 articles. Ongoing work in the lab covers a diverse range of topics and includes studies of stem cells, pre-leukemia, epigenetics, genomics, genome editing, cancer systems biology, synthetic lethality, small molecule drug development, immunotherapy, CAR-T cells, cancer vaccination, and RNA-based gene therapy.

He is a Professor and the System Chair of the Milton and Carroll Petrie Department of Urology at the Icahn School of Medicine at Mount Sinai. In addition, he is the Director of the Center of Excellence for Prostate Cancer at the Tisch Cancer Institute, Director of The Lizzie and Jonathan Tisch Center for Prostate Health, and Director of the Robert F. Smith Prostate Cancer Disparity Program. He has led the Department of Urology to provide state-of-the-art services for diagnosing, treating, preventing, and managing a wide variety of urologic conditions, including genitourinary cancers. Among his other significant achievements is the recruitment of basic scientists, surgeon-scientists in kidney cancer, bladder cancer, kidney stones, endourology, and the recruitment of new medical directors for Interventional Urology, Focal Therapy program, and Men’s Health programs.

He is a pioneer in robotic surgery and has been involved in developing Robotic Prostatectomy from its inception. He has made a significant impact on the anatomical foundations as they apply to Robotic platforms and has performed over 7,500 robotic prostatectomies in his career. He is one of only a few robotic surgeons to be awarded research grants from the National Institutes of Health and the Department of Defense, including an R01 grant for which he serves as the Principal Investigator, researching the utility of multiphoton microscopy during prostate cancer treatment.

She is Professor of Oncology at Roswell Park Comprehensive Cancer Center, Buffalo, NY where she focuses on multidisciplinary care and clinical research of patients with gastrointestinal cancers with special focus on NETs. She got her medical degree from Grant Medical College, University of Bombay, Internal medicine residency at Lincoln Medical Center and Cornell Weill School of Medicine, NY and Fellowship in Medical Oncology at Roswell Park, Buffalo before joining the GI Medical Oncology Division as faculty. She is the Section Chief of The GI Medical Oncology Division, Vice Chair of Faculty Recruitment & Retention, and Co-Leader of the Liver and Pancreas Tumor Program. She also serves on the NCCN and ASCO Hepatobiliary cancer treatment guidelines panels and has held several leadership positions in national organizations and grant review panels.

She is a physician scientist with a focus on translational research, clinical trials with non-invasive biomarkers. The highlight of her career has been her work with Dr. Bud Tennant, a veterinarian who discovered the woodchuck model of hepatitis B related hepatocellular cancer which has now moved from Cornell University to Roswell Park and continues to bring collaborators and industry partners to Roswell for both antiviral and antitumor research.

He received his Ph.D. in Biochemistry and Molecular Biology from Brunel University, and is presently, a Professor of Cancer Biology at the Center for Gene Regulation in Health and Disease. He is an internationally recognized expert in the nuclear pre-mRNA splicing of the minor class introns and regulation of the Androgen Receptor mRNA metabolism. His research led to the seminal discovery that the Androgen Receptor, a holy grail of Prostate Cancer therapy, is controlled by multiple microRNAs, which laid the foundation for the miRNA-based Androgen Deprivation therapeutics. Educated in India, he moved to a World Bank Institute to work on the parasitic disease of the cattle on the East Coast of Africa. He worked in the Lerner Research Institute of the Cleveland Clinic Foundation, a number one hospital and research institute in cardiovascular diseases globally for the last 27 years. As a research associate scientist, he cloned and characterized numerous RNA-RNA interactions of the minor spliceosome. His work was the first to demonstrate the conservation of the minor spliceosome between plants and humans for nearly 1 billion years of evolution. He has received various awards and his trainees are successfully working in academics and the biotechnology industry globally. In addition, he continues to volunteer to assist junior faculty and numerous students in the USA and India in research and academic avenues.

He is a Professor of Medical Oncology and Therapeutics Research at Beckman Research Institute and an affiliate full member of Comprehensive Cancer Center and Developmental Cancer Therapeutics at City of Hope, Duarte, CA. Educated in Agra and Lucknow, he received the Council of Scientific and Industrial Research fellowship during his PhD. He did his post-doctoral training at the University of Texas Medical Branch at Galveston. His research interests are in glutathione metabolism and its role in stress-defense, carcinogenesis, drug-resistance, radiation-resistance, and cell-signaling mechanisms. The focus of his current research is the development of natural compounds that broadly target cancer-specific signaling networks into the next generation of cancer preventive and therapeutic drugs that have the advantageous side-effect of lowering insulin-resistance. He has successfully employed a highly effective in-silico signaling model based on the mercapturic acid pathway, which has already yielded three novel natural source lead-compounds with very high efficacy in tumors of prostate, breast, renal, and neuroblastoma. His lab is also focus on multi-drug resistance in cancer and the role of non-ABC drug transporter (RLIP/RalBP1) in tumor progression.

He is the Director, Division of Hematology-Oncology, Professor of Medicine and Oncology, Albert Einstein College of Medicine and Montefiore Medical Center. He did his MBBS at the All India Institute of Medical Sciences, residency in Internal Medicine from the University of Illinois College of Medicine at Chicago and fellowship in Hematology and Medical Oncology from the McGaw Medical Center of Northwestern University. His lab has been involved in study of pathogenesis of blood cancers. His work has shown that certain signaling pathway are activated in leukemias and pre-leukemias and this work has directly led to clinical trials with drugs targeting these pathways. He has also shown that increased risk of blood cancer mutations is seen in 911 WTC first responders. He has also worked on studies on the effects of COVID in patients with blood cancers. His research work has been funded by NIH, DOD and Leukemia and Lymphoma Society.

He is a professor of Biology and the founding director of Cancer Biology Research and Training and Freshmen Biology Programs at Alabama State University. After getting his Ph.D. from Banaras Hindu University, he did his postdoctoral training in the Division of Biology, Kansas State University; Division of Allergy and Immunology, Department of Pediatrics, Washington University School of Medicine, St. Louis; and Division of Rheumatology, Department of Pediatrics at Medical College of Wisconsin, Milwaukee. He serves on several NIH study sections and the editorial board of scientific peer-reviewed journals. His work is currently supported by research and educational grants from the National Institutes of Health and the National Science Foundation. Dr. Mishra has several awards and recognition for his teaching and research. His research focuses on broader areas of immunology and tumor biology. Currently, hsi lab investigates the roles of dietary compounds, microbial metabolites, and immune cells, especially regulatory T cells and NK cells, in prostate cancer development and progression and also on prostate cancer health disparity, especially in the blackbelt of Alabama.