HomeAmericasCommunityThousands of Revelers Participate in ‘Holi Hai’ in NJ 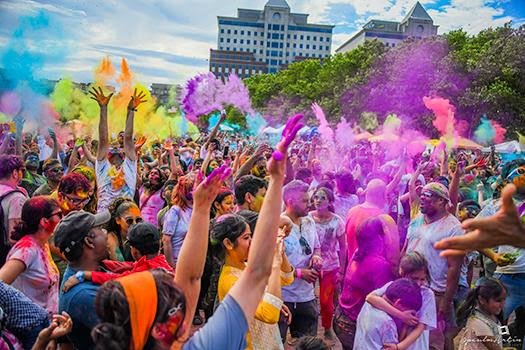 The revelers then participated in a color countdown and embarked on the Color Walk from Jersey City to Hoboken along the Hudson River, which involved the beating of drums, color throwing and lots of cheering and dancing.

Upon arrival at the Hoboken train station, Mayor Ravi Bhalla welcomed the group and escorted them to Pier A Park, where the partying continued into the early evening with food vendors, clothing and jewelry stands, live dance and music performances, as well as a DJ. All in all, this live event attracted more than 5000 people during the entire day.

In a press release, Rimli Roy, Artistic Director of Surati said the event had been envisioned to “edu-tain the community-at-large on Indian art and culture and convey the universal messages of love, acceptance, peace and brotherhood.”