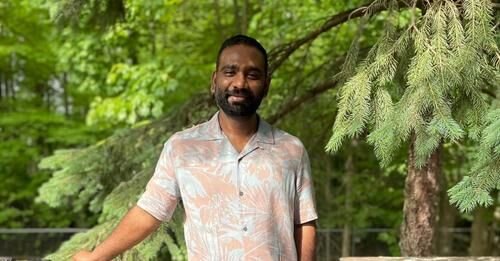 Edison, New Jersey resident Dhanush Reddy was found dead as Hurricane Ida slashed its way through the East Coast, killing at least 47 people. Reddy’s body was sucked up into a drainpipe Aug. 31; he was found the next day in a wooded area. (Facebook photo)

The Category 4 hurricane killed a total of 77 people in the U.S., including 27 in New Jersey, 18 in New York, and 20 in Louisiana. Thousands of people were forced to evacuate their homes, as countless others lost power. Damage from the storm could be as high as $80 to $125 billion, according to various reports.

One of the two men swept away in the storm was rescued by South Plainfield police; he was not identified. Reddy could not be rescued; his body was found the next morning in a wooded area in Piscataway, New Jersey.

“We are heartbroken by this tragic loss of life and pray for Mr. Reddy and his family and friends and all those impacted by last night’s devastating storm,” said Anesh in a statement.

Reddy’s landlord Kavita Verma has set up a GoFundMe page on behalf of her former tenant. The campaign has raised $6,813 to help Reddy’s fiancee, Kavya Mandli, get Dhanush’s body back to India.

Malathi Kanche, 46, a resident of Raritan Borough in New Jersey, also fell victim to the savage weather. According to an email sent to India-West, Kanche was heading home after dropping her son off at Rutgers University the evening of Sept. 1, when the small S.U.V. she was driving was overwhelmed by floodwaters set off by the remnants of Hurricane Ida.

With the vehicle stalled in waist-deep water on Route 22 in Bridgewater, N.J., Kanche and her 15-year-old daughter climbed out. They clung to a tree as the torrent rushed past, according to her neighbor Mansi Mago.

Kanche’s daughter was able to swim to a local car dealership and was rescued, but Kanche could not swim and she succumbed to the floodwaters, according to Mago. Her body was found Sept. 3, after an intensive search by multiple law enforcement agencies.

Kanche’s friend Jyotsna Sharma has launched a 30-day learning to swim challenge in honor of Kanche. “This was a lesson learned the hard way. We never took learning swimming seriously but time has come to learn it,” said Sharma in a Facebook post.

“Malathi could not be saved but her tragic death is a lesson for all of us to learn swimming. You never know when you need this skill the most as you do not get life jackets always. Let’s pledge to learn swimming and motivate others to learn it as well,” wrote Sharma.

“We extend our deepest condolences to the family of Raritan resident Malathi Kanche, who tragically died as result of flooding from Hurricane Ida. May she rest in peace,” wrote the Raritan Borough Police Department.

Kanche was a project manager and business analyst at Barclays in New York, according to her LinkedIn profile.

Sunanda Upadhye, a 56-year-old resident of Iselin, New Jersey, drowned while walking to her home on Gill Lane early morning Sept. 2. She was reported missing by her husband Sunil at about 2:28 a.m. when she didn’t come home from work, according to Woodbridge, New Jersey police.

NorthJersey.com reported that Sunanda Upadhye tried to walk on the road, which was impassable to vehicles. When officers and the fire department began a search of the flooded area, they found Upadhye deceased near the Cooper Ave. Park in Iselin at 6:44 a.m.

A Nepali American man, Ang Lama, 50, and his wife Mingma Sherpa, 48, were trapped in their basement apartment along with their two-year-old son Lobsang, as floodwaters from Hurricane Ida came through the window of their Queens, New York apartment. Choi Sledge, who lives on the building’s third floor, told The New York Times that Sherpa called her around 9:30 p.m., frantically asking for help.

“She said, ‘The water is coming in right now,’ and I said, ‘Get out!’ Get to the third floor!” Sledge said. “The last thing I hear from them is, ‘The water coming in from the window.’ And that was it.”

A friend of the family, Passang Nima Sherpa, wrote on Facebook: “Words cannot describe what I am feeling. I give my condolences to the entire family. God rest their souls. I am shocked by the news of the death and I express my deep condolences to the bereaved family and relatives in this sad moment.”

In related news, the Saffron Banquet Hall in Manville, New Jersey, exploded in flames around 2 a.m. on Sept. 3 with residents from surrounding towns reporting hearing a loud explosion, reported ABC7. Firefighters could not reach the building because of floodwaters from Hurricane Ida. Authorities suspected gas leaks triggered by the flooding fed the flames.

“I don’t know what to do and how to deal with something like this,” Jayesh Mehta, who has owned the hall since 2018, told NorthJersey.com.

“I haven’t had any such disasters like that in my life. Until when it was flooded and the water was inside, I was okay. I knew I had to repair it and fix it. Now, I don’t know. Something like this has never happened to me. I don’t know how to deal with it. I’ve had a sleepless night,” he said.

Events were scheduled at the hall last weekend. But Mehta was unable to access his building to assess the damage.

Meanwhile, the family of Mitesh and Nirali Patel was lucky to make it out of their home in Rahway, New Jersey, with their one-month-old daughter before it exploded Sept. 2 due to a gas leak caused by damage from Hurricane Ida. According to a GoFundMe page set up to help the family recover from their loss, over $64,000 had been raised out of total goal of $200,000 as of Sept. 5.