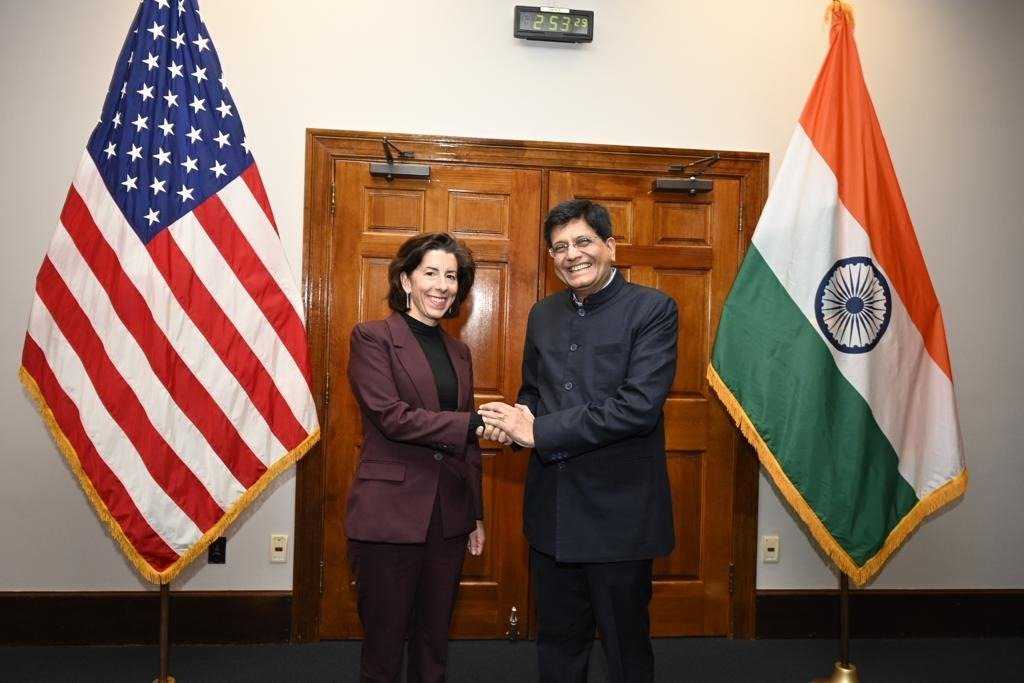 WASHINGTON, DC (IANS) – India’s Commerce and Industry Minister Piyush Goyal said that India is not interested any longer in the ‘mini’ trade deal that was once under discussion with former President Donald Trump and a Free Trade Agreement is not on the table because President Joe Biden’s administration is not currently interested in negotiating one with any country.

India and the US have decided to focus instead on greater market access, ease of doing business between the two countries and a larger footprint regarding trading, investment, and business, the Minister said on January 11.

Two specific targets for this elevated engagement were semiconductors and defense production.

Goyal made the remarks while speaking with reporters after discussions with US Trade Representative Katherine Tai at the 13th meeting here in Washington D.C. of the Trade Policy Forum, which is the highest platform for trade talks between the two countries.

Recent trade relations between India and the US have been marked by a lack of significant progress, in stark contrast to the frenetic pace set by the two sides just a year before in the run-up to Trump’s visit to India in February 2020. Talks collapsed and Goyal had blamed the Trump administration for it, saying the former administration kept shifting the goalpost.

“In terms of the mini trade deal, I think it was too mini to really merit any great effort on both sides,” Goyal said of the negotiations. “And we have even forgotten most of those issues. We are looking at much bigger ambitions in our trade with the US.”

Goyal had led the talks on the Indian side then, as now, and he had at one stage exuberantly declared that the deal was “just a phone call away”.

The Minister was also dismissive of the withdrawal of preferential zero-duty benefits the US had provided to imports from India under the Generalized System of Preferences program.

Trump had ordered the withdrawal of the benefits in 2019, just a few days after Prime Minister Narendra Modi started his second term, to compel India to concede more market access to US products as part of a trade deal Washington was trying to inflict on New Delhi.

India was exporting more than $6 billion worth of goods to the US under this scheme at the time, which accounted for 22 percent of its total exports to America, according to US data.

All of them were mostly small businesses owned.

While India was no longer interested in a mini-trade deal or was very keen on the restoration of GSP, the Minister did indicate that it would be interested in an FTA as India was signing such deals with other countries, such as Australia and the UAE, and is in active discussion with Canada, the UK, Israel as well as the EU.

“The US is currently not looking at any free trade, free trade in any country whatsoever, as a matter of their political policy,” Goyal said, affirming reluctance on the part of the US to consider a big, ambitious deal.

India-US trade stood at $160 billion in 2021, which is huge from where it was a decade ago but remains way too short of the $ 500 billion target assigned to it by Biden when he visited India as Vice President in 2013.

Goyal put that target on an inter-galactic rocket to $1 trillion in 2021.

India-US trade was once seen as the only significant drag on the relationship which was otherwise on an upward trajectory, fueled by bipartisan support on either side.

It has been relegated since to a lesser irritant compared to problems caused by Modi’s blatant pitch for a second term for Trump at the ‘Howdy Modi’ event in 2019, which put him further at odds with America, combined with India’s position on Ukraine.