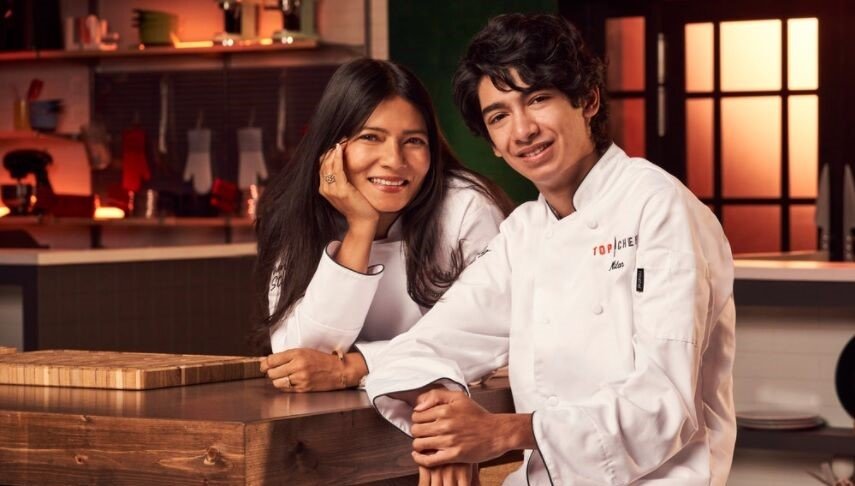 Two up-and-coming Indian American culinary stars are currently in the middle of a major TV gig, with their mothers by their side.

Chevy Chase, Maryland-based Milan Bhayana and Palo Alto, Calif.-based Anika Kumar – who competed on Season 8 of “MasterChef Junior” – are among 13 young chefs from across the country who are competing on the Peacock series, “Top Chef Family Style,” which began streaming Sept. 9.

In the first season, these young chefs get to bring a plus one to compete together in a series of exhilarating challenges for the ultimate cash prize and culinary stardom.

Bhayana is accompanied by his mom Chandrani Ghosh and Kumar’s plus one is his mother Anupama Kumar.

From mastering molecular gastronomy for the cast of Peacock’s “Saved By The Bell” to cooking in a culinary smackdown for WWE Superstars and creating a meatless menu for an NFL tailgate with the LA Rams, the chef duos are put to the test in a series of creative and suspenseful quickfire and elimination challenges.

Bhayana loves reading and excels in his social studies class, but he is not your average 15-year-old. He and his big sister have a #foodtiktok account with over seven million likes. He also is the youngest semi-pro player of Magic: The Gathering, a popular collectible card game. He’s traveled the world playing Magic: The Gathering, which has allowed him to eat some of the world’s finest cuisines, according to his bio. Nowadays, he spends his time cooking gourmet dishes for his 300,000 TikTok followers.

Ghosh, an inspiring novelist, grew up in India and didn’t learn to cook until she was in her 20s living in the United States. She loves cooking with a lot of spice and gravitates towards Indian and Italian cuisines, noted her bio.

Anika Kumar started cooking at a very early stage. She was only four years old when she went to a Christmas sweet treats week-long camp organized by the city. She loved her experience and has not looked back since, said her bio.

The youngster has learned many of her skills from attending various cooking summer camps, including several Sur La Table classes. From second to fifth grade, she was selected from her school to attend district finals of a Sodexo Cooking Competition and even won the Best Cooking Skills award in fifth grade.

Anika’s mom, Anupama, grew up in India watching celebrity chef Sanjeev Kapur. When she came to the U.S., she became a fan of Jacques Pepin and Emeril Lagasse. Anupama cooks mainly Indian food but also dabbles in Asian and Mexican cuisine.

Each week, the pairs will showcase their culinary prowess and teamwork for guest judges and special guests, including Jesse Tyler Ferguson, who challenges the chefs to make a dish highlighting luxury ingredients, such as truffles, caviar and sea urchin, while Jojo Siwa tasks the duos to wow the judges by sight and taste in a sweet dessert spectacle.

Keeping it in the family, Indian American “Top Chef” host Padma Lakshmi, head judge Tom Colicchio and an array of alums stop by the kitchen to lend their expertise.

At the end of the epicurious journey, only one chef duo will be crowned the winner of “Top Chef Family Style” along with the grand prize, including $50,000.