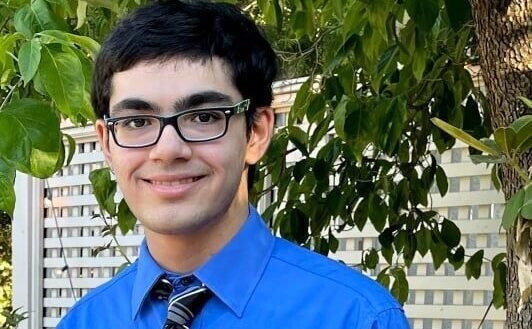 An Indian American 18-year-old Ph.D. student, Tanishq Abraham from UC Davis, California, has been named among the Top 50 finalists for a $100,000 Global Student Prize. The international prize is sponsored by the London-based philanthropy organization The Varkey Foundation and the U.S.-based Chegg.org, a philanthropy division of Chegg. This is the inaugural edition and is the sister prize to the $1 million Global Teacher Prize awarded since 2015.

The 50 Global Student Prize finalists come from 30 countries and range in ages 17 to 30 years old. They were shortlisted from more than 3,500 applicants from 94 countries, according to a press release.

In 2016, after graduating from engineering college, Abraham became the youngest biomedical engineer at 15. Upon hearing the news, Abraham said: “It’s humbling to see that my love for learning and overcoming challenges have inspired others. I am very excited and honored to be one of the Top 50 finalists.”

At the time of the application’s deadline (in May 2021), the prize money was $50,000 but it was a pleasant surprise for the finalists during the announcement that the prize was doubled.

“Our finalists this year have a made a huge impact in areas from the environment to equality and justice, from health and wellbeing to education and skills, from youth empowerment to ending poverty. We were so inspired by the achievements of these extraordinary students throughout the world that applied for the inaugural Global Student Prize that Chegg chose to double the value of the prize to $100,000,” said Lila Thomas, head of Chegg.org.

In the last 10 years, overcoming barriers and challenges, Abraham has inspired many around the world through his exemplary educational and scientific achievements at a young age. Recently, a Madras (India) high court judge used Abraham’s life story and quoted his TEDx talk given when he was just 9 years old. The judge cited: “People should go to university and college when they are ready, not when they are old enough to go,” in connection with a case for a 16-year-old who was denied entry to a college.

His unique educational story has also been used as a case study in the latest edition of the psychology textbook, “Introducing Psychology” (Schacter, Gilbert, Nock, Wegner, edn 5). Tanishq’s invaluable contribution to inspiring many students globally, in education and in the area of biomedical engineering research at remarkably young age has been recognized by the Global Student Prize selection committee.

Abraham plans to become a medical doctor as well as a research scientist. However, it hasn’t all been easy, noted the bio on globalteacherprize.org. Along the way he faced bullying and unsupportive teachers – and he initially struggled to find professors who would allow him to sit in on or take their courses. Along the way, he has shared his love of learning through TED talks, guest lectures, TV shows, social media posts, university teaching, and mentorship of undergraduate scientists.

Abraham has received a great deal of public recognition for his talents and achievements. His educational trajectory has garnered international media coverage on AP, CNN, Yahoo, MSNBC, MBC, ABC, The Washington Post, Times of India, Indian Express and many other media. He was the recipient of a congratulatory letter from California Governor Arnold Schwarzenegger for becoming a Mensa member at such a young age, as well as one from President Barack Obama for graduating high school at age 10. He is the youngest ever member of Phi Beta Kappa. And he has already contributed to scientific research, having co-authored a 30-page chapter in the book Artificial Intelligence and Deep Learning in Pathology at the age of 16.