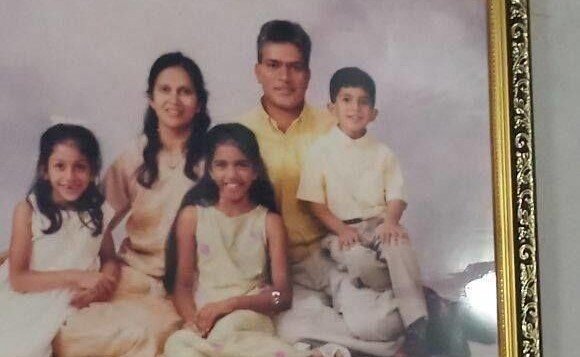 A memorial page had been set up on Facebook to pay homage to the late psychiatrist Achutha Reddy (top, 2nd from right, in photo with family). (Facebook memorial page photo)

WICHITA, Kan. — A 26-year-old man was sentenced Nov. 9 to life in prison for stabbing a Wichita Indian American psychiatrist more than 160 times and running him over with a car four years ago.

Umar Dutt pleaded guilty in September to first-degree murder in the Sept. 13, 2017 death of Dr. Achutha Reddy. Prosecutors said Dutt was a client of Reddy’s.

Police found Reddy’s body in an alley behind Holistic Psychiatric Services and arrested Dutt after a security guard at the Wichita Country Club reported a suspicious person with blood on him sitting in a vehicle in the parking lot, KAKE-TV reported.

When the officer manager tried to stop the assault, Reddy fled. But Dutt caught up with him and stabbed him before running over him with a car, police said.

India-West adds: Investigators had said Dutt was a client of Reddy’s and that Reddy had been stabbed about 165 times. The doctor also appeared to have suffered blunt force trauma and may have been run over by a vehicle.

Lt. Todd Ojile, section commander of the homicide division at the Wichita Police Department, told India-West shortly after the attack that no motive had been established for Dutt’s slaying of Reddy. (See earlier story: https://bit.ly/2FKQGMw)