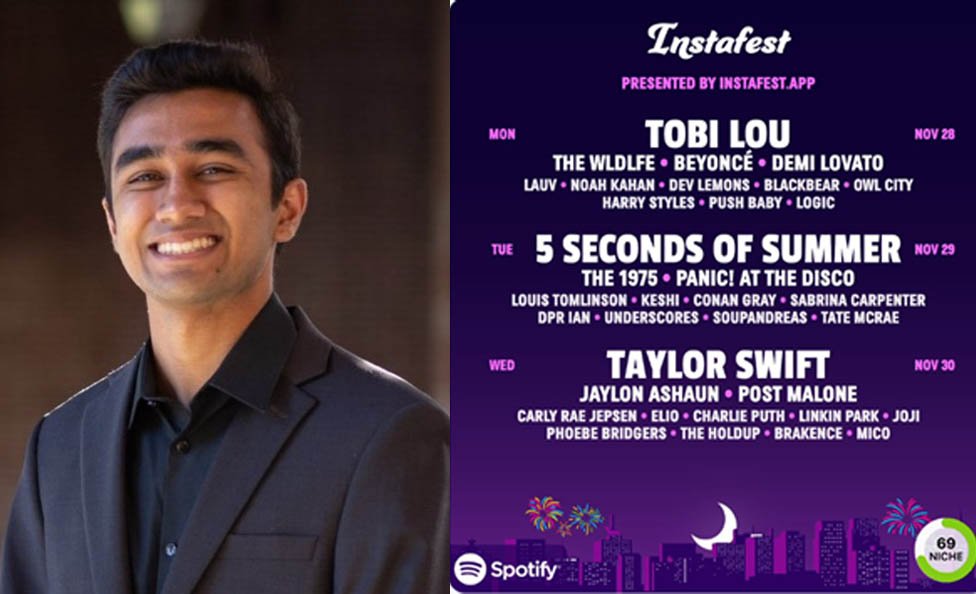 IRVINE, CA – Instafest, a third-party app designed by Anshay Saboo allows users to get a sneak peek into what they have been listening to. The website debuted during thanksgiving and has gone viral. According to Saboo, over 17 million users have visited the site in just 9 days. This has been all the rage on IG, Twitter, and FB, with millions of users sharing, discussing, and praising Instafest, he said.

Since the website’s launch, artists like Derivakat, Ryan Joseph Kirby, and HT Haze have shared their Instafest musical lineup.

The project started said Saboo, with him imagining his dream musical lineup. “I had the idea when I was in bed scrolling through TikTok one day. I saw people were posting videos from Coachella and I started thinking about how I would set the Coachella lineup if I could pick the artists. The thought process led to me thinking about generating a music festival graphic using a Spotify integration, and I built off from there,” he said.

At InstaFest, you can create and share a music festival lineup made using your most-listened-to artists on Spotify. You can customize the theme and name of your festival to make it yours and send it to your friends to show it off! The website also has a ‘Basic Score’ feature – a rating system ranging between 0 – 100 calculated based on how niche your musical festival is.

“If you have a lot of popular artists on your festival, then you will have a 100 basic score, but if you listen to small, niche artists with not a lot of listeners, your score will be lower,” Saboo said.

To get started, all that has to be done is to log in with Spotify credentials and Instafest will automatically generate a poster based on the artists the individuals hears on Spotify.

Saboo, who resides in Irvine, CA  is a junior at the University of Southern California where he is pursuing computer science.