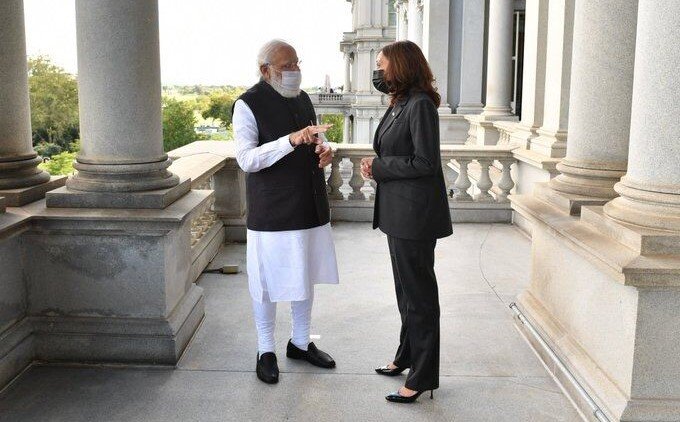 Prime Minister Narendra Modi and Vice President Kamala Harris in Washington, D.C. Modi invited Harris to India, to continue “this journey of victory.” India, he said, is “waiting to welcome you.” (photo via IANS/Twitter/ PMOIndia)

NEW YORK – U.S. Vice President Kamala Harris has told Prime Minister Narendra Modi that she was asking Pakistan to act against terrorism and ensure that terror groups do not target New Delhi or Washington, according to India’s Foreign Secretary Harsh Vardhan Shringla.

He said that when the issues of terrorism came up during their meeting on Sept. 23, “the vice president suo moto referred to Pakistan’s role in that regard. She said that they were terror groups that were working there. She asked Pakistan to take action so that these groups do not impact on U.S. security and that of India.”

Shringla asserted that “she agreed with the prime minister’s briefing on the fact of cross border terrorism, and the fact that India had been a victim of terrorism for several decades now, and on the need to rein in and closely monitor Pakistan’s support for such terrorism.”

Briefing reporters in Washington after the meeting between the two leaders, he said that the encounter, the first in-person meeting, “reflected warmth and cordiality.”

The discussions were “substantive” and also covered the Covid-19 pandemic, climate change, cooperation in the technology sector, cybersecurity and space, he said.

A White House readout of the meeting said that Modi and Harris “supported expanding bilateral security cooperation in the face of modern threats, including terrorism and cybercrime.”

Harris, who is the chair of the National Space Council, “encouraged expanded U.S.-India space cooperation, and she and Prime Minister Modi explored ways to build on existing, robust bilateral collaboration on space,” the readout added.

Some of the supporters of Harris and her Democratic Party have accused Modi of eroding democracy.

The readout pointedly said: “They each emphasized a commitment to democratic values and discussed the need to strengthen democracy at home and abroad.”

The Indian External Affairs Ministry’s readout did not mention any discussion of democracy.

When the topic of the pandemic came up, they discussed collaborating on vaccine production under the Quad Vaccine Partnership, the White House readout said, adding: “The vice president welcomed India’s commitment to resume vaccine exports and the progress of its domestic vaccination campaign.”

The White House’s account of the meeting made no mention of Pakistan’s role in terrorism or asking it to take action against terrorists.

The Indian readout said that Modi told her “about India’s push for increasing renewable energy and the recently launched National Hydrogen Mission.”

“He also emphasized the importance of lifestyle changes to promote environmental sustainability.

“Both leaders acknowledged the vibrant people-to-people linkages as the bedrock of the mutually beneficial education linkages and the flow of knowledge, innovation and talent between our two countries,” it added.

Nikhila Natarajan of IANS adds: Black on white, white on black. At 3:19 p.m. Sept.2 4, when America’s first ever Indian American Vice President Kamala Harris welcomed India’s Prime Minister Narendra Modi at 1600 Pennsylvania Ave for the first time after taking power in the 2020 elections, it was a striking visual for a historic moment, blending austere monochrome with the all-white backdrop of the White House pillars.

Both wore masks – Modi white and Harris black. Harris dressed in a sleek black and white pantsuit, and sported her string of trusty pearls. Modi arrived in a crisp, milky white kurta ensemble with a black Nehru jacket, teamed with black shoes. Harris began about 5 minutes of remarks noting the passage of time since Modi was here last.

“It is my understanding that this is your first trip outside of South Asia for at least the last 16 months,” she said.

Back then, Donald Trump was the U.S. president, his Twitter megaphone was a riot, Covid-19 hadn’t exploded, masks weren’t yet a cultural flashpoint, Modi and Trump headlined a “Howdy, Modi!” rally in Houston, drawing over 50,000 people.

Trump is gone now, President Joe Biden has pulled U.S. troops from Afghanistan, the U.S., Britain and Australia stunned France by cutting a multibillion-dollar contract to acquire U.S. nuclear-powered vessels. The political contrasts are sharp, Chinese aggression is rising, global contradictions are shifting, flexible multi alignments are on the ascendant.

Biden’s deputy Harris spoke first, invoking themes that will be on full display at the first-ever leader level Quad summit. Fragility, cooperation and resilience were on the table in the context of the Indo-Pacific.

“And as it relates to the Indo-Pacific, the U.S., like India, feels very strongly about the pride of being a member of the Indo-Pacific, but also the fragility and the importance and strength as well of those relationships, including maintaining a free and open Indo-Pacific,” Harris said.

“Early in the pandemic, India was a vital source of vaccines for other countries. When India experienced a surge of Covid in the country, the U.S. was very proud to support India in its need and responsibility to vaccinate its people,” she said.

“It is of particular note and admiration that India, I’m told, is currently vaccinating approximately 10 million people a day, as of today,” Harris noted.

Modi began speaking at 3:24 p.m., checking off many of the same boxes.

“India was confronted with the second wave of the Covid-19 pandemic – a very difficult time for us. But so – like a family, the sense of kinship and so warmly you extended a helping hand, the words that you chose when you spoke to me – I will always remember that, and I’d like to thank you from the bottom of my heart,” he told Harris.

Modi invited Harris to India, to continue “this journey of victory.” India, he said, is “waiting to welcome you.”

Whenever Kamala Harris touches down in India, it will be a standout journey for the idea of the Indian diaspora’s promise. Her rise was made possible by another audacious traveler – her mother Shyamala Gopalan, who arrived in America as a 19-year-old in 1958, on an academic scholarship.

Modi spoke to that potential today. “Excellency, between India and the U.S., there are very vibrant and strong people-to-people connections that we have. You know that all too well,” he said.

“More than 4 million people of Indian origin, the Indian community is a bridge between our two countries – a bridge of friendship. And their contribution to the economies and societies of both our countries is indeed very praiseworthy.”