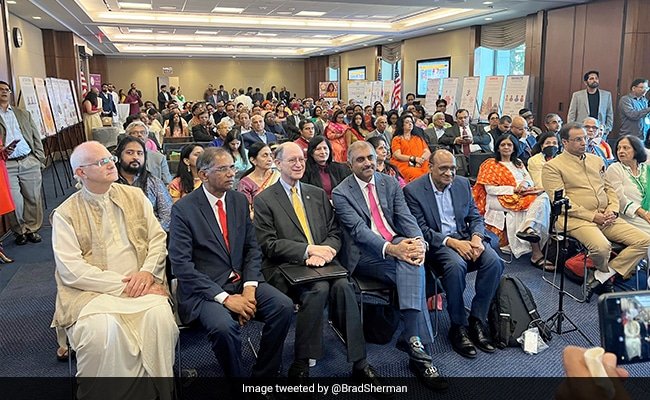 WASHINGTON, DC – As many as 75 Indian American organizations came together at the US Capitol to celebrate Azadi Ka Amrit Mahotsav. The event was marked by a slew of speeches from elected and government officials representing both, India and the US.

In a message to the community Indian Prime Minister Narendra Modi said,

“Members of our diaspora have always been admirable ambassadors for our nation. They have spread the fragrance of Indian values by living them – respecting all cultures, mingling seamlessly and enriching societies with their unique contributions.”

India’s Ambassador to the US Taranjit Singh Sandhu said it was special to be celebrating at the US Capitol. “Congress has played a special role in cementing this fantastic relationship, which we are celebrating today. I have seen this for the last 25 years,” he said.

“I am a strong supporter of India and Indo-US relationship,” Congressman Brad Sherman (D-CA) said pointing out that India is central to America’s Indo-Pacific strategy. India needs to have all options available for its defense in view of the threat being posed by China, Sherman said.

The China threat was a recurring theme, with lawmakers pledging to work to strengthen ties with India.

“I serve on the Armed Services Committee and really understand how important that relationship is between the United States and India,” said Congresswoman Elaine Goodman Luria (D-VA) in her address.

“We are allies and we need to remain allies and work together because there are countries out there that don’t want to see you succeed,” said Congressman Buddy Carter (R-GA).

Dr Jashvant Patel, CEO of the US Indian Relationship Council, President of Sardar Patel Fund for Sanatan Sanskruti, and chairman of the Organizing Committee lauded India saying, “Despite our large populations and lack of resources, innovation is at the forefront of what we do.”