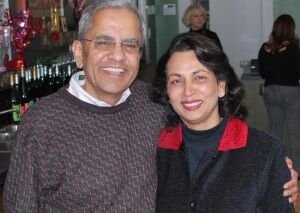 An Indian American couple in Virginia have established a winery that brings a dose of Indian heritage for patrons to experience each visit.

Narmada Winery, co-founded by Sudha Patil, offers much of her heritage throughout the winery, including a statue of Ganesh, the Hindu god of wisdom, and Lakshmi, who represents good fortune, that guard each side of the fireplace. Additionally, according to an AARP report, photographs taken in India adorn the walls, while several custom-designed mirrors in the tasting room mimic the shape of the henna tattoo designs, or mehndi, that typically adorn an Indian bride.

Of the 300 or so wineries in the state, Narmada is the only one owned by a South Asian and just one of two owned by an Asian American, according to the Virginia Wine Board, the report said.

Patil opened the winery, located in Amissville, in 2009 with her late husband, Pandit Patil, who died three years ago. The winery represents the culmination of their passion for growing grapes, their love of family and their South Asian heritage, the report notes.

“My heritage is important to me. It was important for me to show that part,” Patil said in the AARP report.

The winery, according to its website, www.narmadawinery.com, features 18 wines – a blend of reds, whites, roses and other blends.

The couple arrived in the U.S. from Mumbai, India, some 40 years ago to further their education. Pandit pursued studies in engineering at the University of New Mexico and at Carnegie-Mellon in Pennsylvania, the website notes.

Throughout their married life, Pandit and Sudha traveled the globe and kindled their passion for fine wine. They eventually settled down in northern Virginia after Pandit had earned his doctorate from the University of Pittsburgh.

It was then Sudha was able to pursue her dental studies, earning a BS in chemistry at George Mason, her DDS from Georgetown and a certificate in endodontics and Masters in oral biology from the University of Maryland, the bio of the couple noted.

Pandit’s career as an engineer and Sudha’s as endodontist were both very rewarding. But as the years passed, Pandit and Sudha started to plan for their eventual retirement. At this time, Virginia was just starting to be known as a quality wine-producing region.

At the couple’s 29th anniversary dinner at the renowned Inn at Little Washington, the plan to plant a vineyard took shape. On this visit to Rappahannock, Pandit and Sudha discovered a gently rolling piece of land on which to build their dream, the website noted.

The first vineyard was planted in 2004. Several more acres were planted the following year and today has reached 20 acres, it said.

Today, Sudha continues to closely monitor the vines throughout the growing season. She scouts the vineyards regularly to ensure that the fruit is healthy and sprays only as needed to prevent pests and other problems, it said.

The Patils began construction on their own winery facility in 2009. The combination of art and science is a given in making wine and Sudha’s competence in both areas has made Narmada Winery something special right from the start.

Gold medals were awarded to Narmada Primita in 2009, and to Narmada Mom – the winery’s signature blend – as well as to Narmada Viognier in 2010. In the following years, Narmada wines have achieved more than 40 gold medals in national and international competitions, Narmada says.

Looking to the future, Pandit and Sudha Patil want to remain a small, boutique-sized winery, producing no more than 5,000 cases a year. It remains essential to Sudha to keep her hands-on approach to Narmada wines with fruit-forward flavors taking the lead and a commitment to the finest quality attainable in Virginia wine, the website said.

Indian influences seep into the wine in other ways, too. Made with vidal blanc and chardonel grapes, Narmada’s 2018 Legacy vintage honors family and heritage with its lush notes of mango, a popular fruit in India, the report said.

The winery also invites guests to celebrate Diwali, the Indian festival of lights, and the spring festival of Holi.